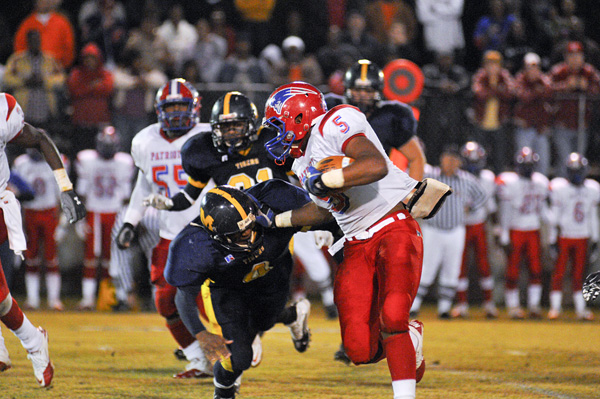 MCKENZIE – Linden turned a pair of McKenzie turnovers into touchdowns in the second half, turning what was a close game into a 47-14 rout in the second round of the Class 1A state playoffs on Friday night.

Linden (11-1) led just 20-14 with six minutes remaining in the game, but the defense snagged an interception off Tigers’ quarterback Sir Wallace Presley and the offense converted it into a a 26-yard touchdown pass from Anthony Robinson Jr. to Najee Bright.

On McKenzie’s next series, the Patriots’ Gerald Bruno sat on a screen pass from Presley intended for Emmanuel Johnson and his pick gave Linden the ball at the Tigers’ seven-yard line. Three plays later, Robinson plunged in from one-yard out with 4:02 left in the third.

“Those turnovers were huge,” said Linden head coach Andro Williams, who had watched McKenzie turn a Linden fumble into points earlier in the second half. “We were sitting in a position to maybe put it away, but we had the fumble and lost it. We had some adversity tonight. But our kids fought through the adversity. I think they left it all on the field, though, because late in the fourth quarter we didn’t have any energy left.”

The Patriots added a pair of late scores as Kendarius Fritts raced 47 yards for a touchdown late in the third quarter and Marquis Shelton had a 36-yard touchdown run with four minutes left in the fourth.

McKenzie (10-1), meanwhile, saw its championship hopes die in the second round again. Last year, it was Linden rival Sweet Water that ended the Tigers’ season, 42-6.

“It’s great to finish the season 9-0 and win the region, but you can look at the kids and tell they’re upset just like the rest of us,” said head coach Miles Brown. “We had too many turnovers and miscommunications. Overall, we didn’t play well, and that’s my fault.”

A Tigers’ fumble on their first offensive series in the game allowed Linden to strike first. Robinson Jr. hit Bruno for a seven-yard gain on fourth down to the Tigers’ 16-yard line and Fritts carried the ball five yards for the touchdown, giving Linden a 7-0 lead. After forcing a McKenzie punt, the Patriots then went 48 yards on five plays with Fritts adding another five-yard touchdown with 25 seconds left in the first quarter.

The Tigers responded. Emmanuel Johnson raced 81 yards on the ensuing kickoff, setting up a 13-yard touchdown pass from Presley to Cliff Pugh.

Linden and McKenzie then exchanged the ball on turnovers. A fake punt pass play was incomplete by the Patriots at the Tigers’ 40-yard line, but McKenzie’s Presley was stuffed on fourth and one at the Linden 40.

Following a McKenzie punt, though, Linden took advantage of good field position to move the ball 49 yards and take a 20-6 lead on Robinson Jr.’s 16-yard touchdown pass to Terris Lewis with 1:55 before halftime.

The Tigers turned a quick Linden fumble after halftime into a touchdown. A pass interference call on fourth and nine gave McKenzie the ball at the 15-yard line. Pugh carried it eight yards on a sweep, then six yards for the touchdown. Johnson’s two-point conversion cut the Patriots’ lead to 20-14.

The McKenzie defense the forced Linden to punt, but Presley’s deep pass was picked off at the 50-yard line on the first play from scrimmage.