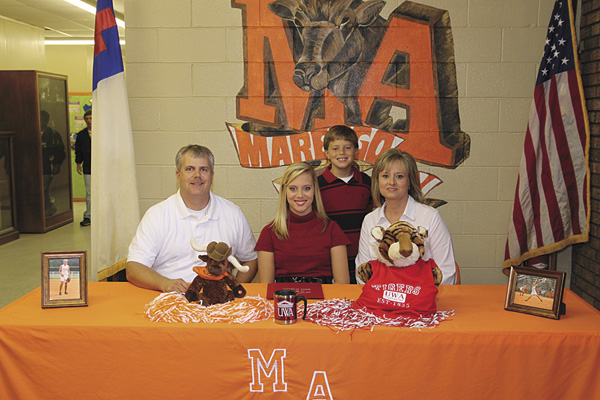 Brock, who attended softball games with her father at UWA as a child, indicated that playing for the Livingston university has long been her goal.

“When I was a little girl it was always, ‘Daddy, wouldn’t it be great to play at UWA,’” Brock said. “I never thought it would be able to happen.”

Brock helped what she felt to be an improbability become a reality last season when she compiled a 25-3 recover over 159 innings of work in the circle. Her all-state season saw her strike out 183 batters and put together 13 shutouts while posting a 1.19 ERA while helping to lead the Lady Longhorns to a state championship. Additionally, Brock hit .457 on the year with a .541 on-base percentage from the cleanup spot, striking out only once in 92 at-bats. She roped 12 doubles and scored 26 runs while amassing 31 RBIs.

Still, even with her sterling junior season, Brock’s softball future remained uncertain. She garnered great interest from junior colleges, but was left hoping for an offer from a four-year school so as to not have to go through the recruiting process again.

“It was a relief,” Brock said of the UWA offer. “This four-year school takes care of all of it.”

Her father, John Brock, could scarcely describe what the opportunity meant for is daughter. He recalled long sessions of working with Jessica on her pitching over the years as he constantly pushed her to improve her game.

“I never thought she was good enough,” John said. “You’re never good enough. You can always be better.”That drive is mirrored in Jessica’s work ethic. Her assessment of where she is as a pitcher and what she needs to focus on during her senior season reveals the aspect of her makeup that keeps her from feeling that she is good enough while simultaneously being good enough for UWA.

“I need to be more physically and mentally ready for the season because last year I was out of shape both ways,” Jessica said. MA head coach Danny Stenz believes Jessica’s innate desire for self-improvement will prove just as much of an asset to the UWA program as her talent.

“The biggest thing she is going to take is not only talent, but her work ethic,” Stenz said. “She has the best work ethic of any girl I have seen in a long time.”

In addition being her school of choice, UWA is close to home. Jessica said that is a considerable bonus given her affinity for quality time with her family.

“I’m a mama’s girl, “Jessica said. “And with me not being able to cook, being 45 minutes away from home is a big deal. I can go home whenever I feel like it.”

The signing makes Jessica the fourth Marengo Academy softball player since 2008 to sign a college offer and first to land an opportunity at a four-year school.

“It’s a big opportunity anytime we get a girl to sign a scholarship,” Stenz said.