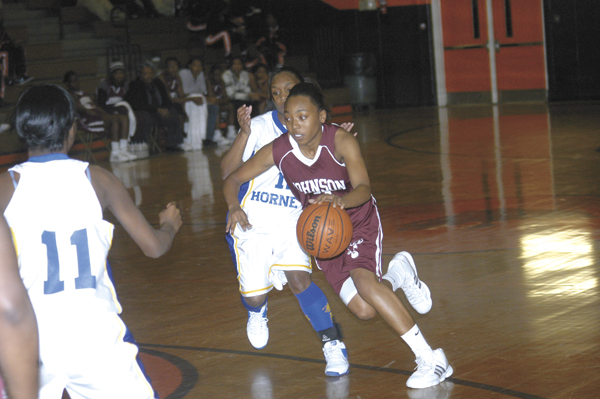 DIXONS MILLS — A game that stayed close most of the way through got out of hand late as A.L. Johnson (9-9) downed John Essex 54-41 Thursday night.

A.L. Johnson led 10-7 after a sloppy first quarter, extending its advantage to 23-18 by half on the strength of 10 second quarter points from guard Ashley Edwards.

Essex rode the post tandem of Nyeshia Daniels and Brittney Daniels back into contention in the second half. By the end of the third quarter, the Lady Hornets had cut the deficit to 37-34.

“Pick it up,” Wolf told her team before the game’s final period. “They showed action. They picked it up. They stayed in the game until the end.”

The Lady Eagles opened the fourth period on a 12-0 run to put John Essex squarely in the rearview mirror and live to play another day.

Edwards led all scorers with 24 points while seventh-grader Tiffany Barber added 13 for the Lady Eagles. Daniels led John Essex with 16 points while Simmons finished with 15.

The loss ends the season for the Lady Hornets, sending A.L. Johnson to a Saturday night clash with Marengo for the Class 1A, Area 4 championship. The win also gives the Lady Eagles a berth in the sub-regional round.

“That’s something grand to that locker room,” an ecstatic Rose Wolf said of her team’s extended playoff life.

“That’s something we’ve been looking forward to, going to the (sub-regional round) and then going to Mobile. I’ve already told my girls to get ready to go past the subs.”

The tournament’s No. 3 seed, A.L. Johnson will face host team and top-seeded Marengo Saturday at 6 p.m. The winner of that game will host a sub-regional game against the Class 1A, Area 1 runner-up.

The loser of Saturday’s contest will travel to face the Area 1 champion, a title that will be decided when Fruitdale plays McIntosh Monday evening.