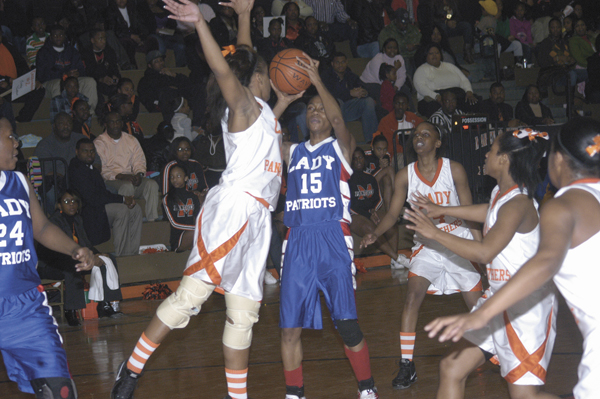 DIXONS MILLS — Marengo (12-2) used its speed to take advantage of a wounded Linden team en route to a 52-28 win in the Class 1A, Area 4 girls tournament Thursday.

“We’ve been blessed to have some experienced players that can run the floor with a lot of speed,” Marengo coach John Agee said.

That speed made a difference from the outset Thursday as Marengo charged out to a 9-2 lead before Linden inserted leading scorer Kileema Rogers into the lineup.

Rogers sustained an ankle injury during the third quarter of Monday night’s play-in game win over Sweet Water, missing the remainder of that contest and much of Thursday’s action.

Rogers presence on the floor appeared to breathe life into the Lady Patriots, drawing a roar from Linden fans in attendance and sparking an LHS run. Despite Rogers not taking a shot in the first period, Linden closed the first quarter gap to 12-8.

Marengo guard Cassandra Thomas rained on the Lady Patriot parade when she rolled in a jumper from the wing as the first quarter buzzer sounded, bringing Panther fans to their feet and extending the lead to 14-8.

Despite its offensive struggles in the second period, Marengo’s defense stifled the Linden attack. Playing much of the second quarter without Rogers, Linden scored only four points in the period, entering the locker room down 25-12 while its leading scorer did not take a shot in the first half.

“She’s one of those kids you can’t stop. You have to try to contain her,” Agee said of Rogers. “I think the ankle injury from the previous game slowed her down. My hat goes off to her for being able to come back and play.”

Minutes into the game’s final period, Marengo called for the equivalent of a line change, sending in a quintet of its youngest players to wrap up the victory.

Briana Delaine led Linden in scoring, hanging 11 points on the night while Rogers’ five points was good enough to be the team’s second leading scorer.

Marengo moves on to play No. 3 seed A.L. Johnson Saturday at 6 p.m. in the finals of the Class 1A, Area 4 tournament.

“They’ve got a real good point guard and some nice size,” Agee said of the Lady Eagles’ strengths.

“It seems to be taking a while to warm up,” he said. “We’ve got to pick up the defensive intensity, get them a little warmer a little quicker.”

The winner of Saturday’s Area 4 championship will host the runner-up from Class 1A, Area 1 while the loser goes on to visit the Area 1 champion in the sub-regional round.