Pats rout Bulldogs in first round 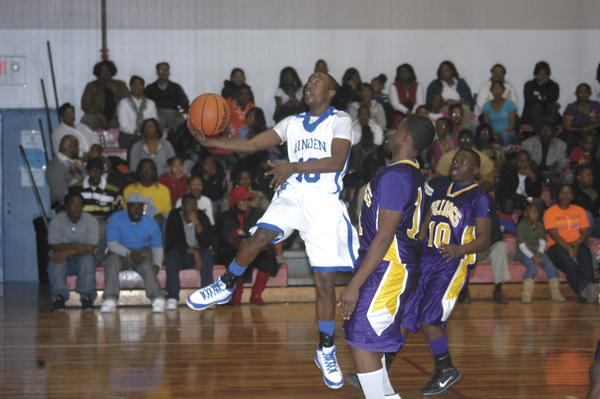 LINDEN — The Patriots’ press defense held Sweet Water to a combined 13 points during the final three quarters of action in Friday’s 95-26 victory during the first round of the Class 1A, Area 4 tournament.

“I thought both units played with a lot of energy and emotion,” Linden head coach Roosevelt Moore said. “We moved the ball well and that led to us scoring 95 points.”

Linden (15-6) led the Bulldogs 30-13 after the first quarter of play before outpacing Sweet Water 19-7 in the second period. Up 49-20 when coming out the locker room, Linden scarcely slowed down while holding Sweet Water to just one shot from the floor in the second half and only a single point in the fourth quarter.

Moore pulled his starters after the third quarter of play, installing his second unit. Still, the deficit scarcely shifted as the reserves ran the pressure defense nearly as effectively as the starters.

“I think us being able to press is important each and every game,” Moore said.

Shauka Reese led the Patriots with 20 points in the game. Imoras Agee scored 14 of his 16 points in the first half before exiting with an ankle injury in the third quarter. Najee Bright scored 12 points while Kendarius Fritts finished with 11 and Wilvonta Horton added nine.

The win puts Linden in the tournament finals against John Essex Monday, a game that is scheduled to tip at 6 p.m.

The victory also clinches a sub-regional berth for the Patriots, who will match up with either Fruitdale or McIntosh pending the results of Monday’s Area 1 and Area 4 title games.