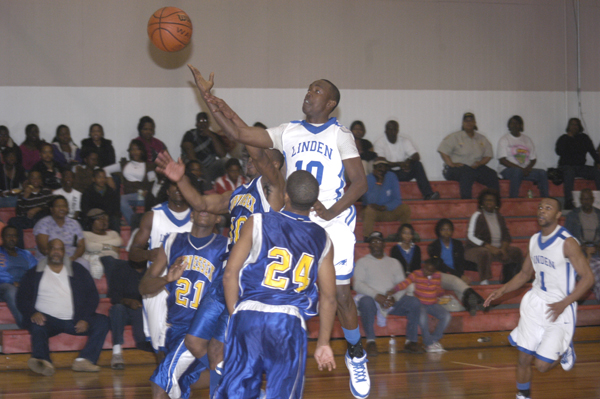 LINDEN — The Patriots (16-6) pulled away in the last minute and a half Monday night to defeat John Essex (12-9) and win the Class 1A, Area 4 championship.

“A couple of our guards didn’t make shots like they normally do,” Linden head coach Roosevelt Moore said.

The Patriots, who scored 95 points in the first round of the tournament Friday night, struggled offensively for much of Monday’s affair.

Linden managed only 24 points in the second half, scoring nine in the contest’s final 90 seconds to put away a game Hornet squad.

With less than three minutes to go in the contest, John Essex squandered three separate opportunities to tie the game or take the lead while trailing 53-51.

A trio of John Essex turnovers kept the team from taking advantage of the opportunity, allowing Linden to ice the game when Shauka Reese found his rhythm and rattled off five quick points.

In the game’s first half the Patriots struggled offensively, whiffing on three-point attempts and blowing lay-ups.

Still, Bruno utilized his quickness and a decisive first step to get to the basket repeatedly. His driving ability paired with pinpoint accuracy from beyond the arc allowed Bruno to score 20 points over the game’s first two quarters and send his Patriots to the locker room with a 38-31 lead.

“I thought when Imoras (Agee) went down that somebody was going to need to step it up and pick up his slack,” Moore said, referring to the freshman guard who sustained a severe ankle injury during Friday’s first round contest against Sweet Water. “Gerald Bruno put the team on his back early (Monday night).”

Essex got the bulk of its scoring from the trio of Keonta Alvis, A.J. Bennett and Wayne Bonner.

However, with Essex threatening to tie the game in the fourth quarter, Bonner sustained an injury.

He was helped off the floor by Essex staff and did not return.

After Bonner’s departure, Essex appeared to lose much of its steam, proving unable to finish on a handful of possessions and ultimately succumbing to Linden’s quickness in the game’s final minute.

Bruno earned tournament most valuable player honors, finishing the night with 25 points, nine rebounds and four steals. Joining him on the all-tournament team was Reese, who finished with 12 points.

Alvis led John Essex with 13 points while Bennett finished with 11.

Bonner contributed nine before leaving due to injury.

The win sends the Patriots to the sub-regional round where they will host the Area 1 runner-up Fruitdale.

John Essex will visit Area 1 champion McIntosh Friday. Both those contests are scheduled to tip at 7 p.m.