Local professor goes Down Under 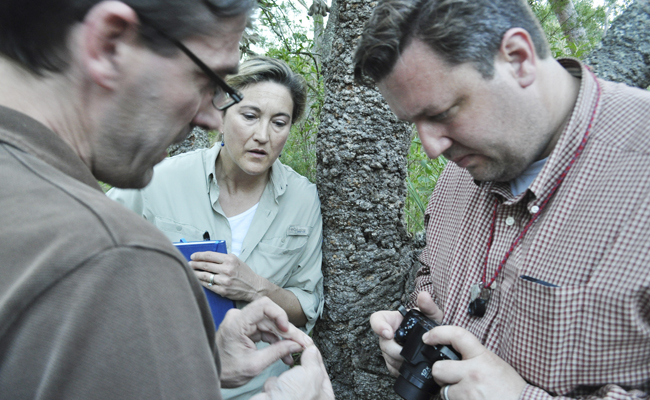 LIVINGSTON – Whether floating above or relaxing down under, the genus of aquatic plants named Sagittaria, or Arrowhead as they are commonly known, create great distress as area invaders on the Australian island continent. University of West Alabama Associate Professor of Biological Sciences Dr. Brian Keener recently came to the rescue of Aussie scientists by helping them in identifying these pesky specimens on a two-week research trip to the country.

“These plants create havoc on the Australian economy,” said Keener, “and their scientists are trying to discover a means to control the non-native weed.”

Aquatic weeds affect the Australian economy by interfering with access to waterways for recreational purposes such as fishing and boating, compromising water quality by reducing oxygen levels, restricting light, and interrupting irrigation canals necessary for water distribution in the dry Mediterranean-like climate.

Sagittaria species occur in North America with a diversity hotspot in the southern United States. A noted specialist of the genus, Keener and UWA were the obvious starting point for Melbourne bioscientists Rae Kwong and Jean-Louis Sagliocco to begin their natural habit studies of the plant family in August 2010.

“Researchers in Australia have a tradition of biocontrol, which means they like to study an invasive species, be it animal or plant, in its natural habitat,” explained Keener. “They seek to discover some sort of natural enemy with the hopes of introducing that particular species to Australia to help control the problem species.”

One of the species, Delta Arrowhead (Sagittaria platyphylla), was identified as native to Alabama several years ago by Keener from specimens sent to him from Australian scientists. He added that Kwong and Sagliocco visited UWA last year before setting out on a three-week research trip to “pinpoint the source of the plant introduction in Australia, hoping for success with a natural enemy that could control it.”

Their journey ended with the two researchers returning to campus with a large collection of Sagittaria samples for Keener to identify. Kwong and Sagliocco donated the plant specimens to the UWA Herbarium, a collection of pressed and dried plant specimens, for future use by instructors, students and other professional researchers. Keener serves as director of the Herbarium.

The Sagittaria population in the wetlands and waterways of Australia is difficult and costly to manage. Realizing the importance of developing controls for the weed growth, the Department of Primary Industries of Victoria funded a grant for Keener’s late March research trip to Australia.

“They had some serious debate as to whether they had a species called Sagittaria graminea,” which is a grass-leaved arrowhead, said Keener. “My main objective was to look at their specimens in herbaria and field sites where they knew Sagittaria occurred. It was important to ascertain the correct identity of the Sagittaria species in Australia to facilitate future studies in the native habitat for natural enemies. We determined there were five species of Sagittaria present in the country,” he continued, “but only two appeared to be troublesome.”

While in Austrialia, Keener was also responsible for the surprise discovery from Herbarium specimens of two additional species of the plant not previously documented, Sagittaria filiformis and Sagittaria macrophylla.

The Alabama habitat and Keener’s expertise have prompted Kwong and Sagliocco to return to UWA for a visit in August.