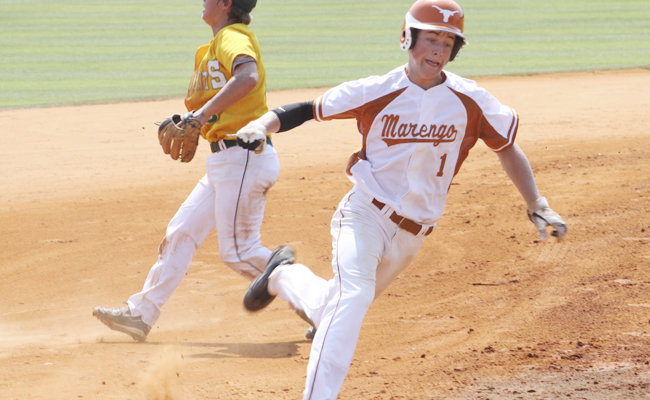 Game one saw the teams trade blows in the first inning as Edgewood plated two runs on a single by Dylan Ingram. Marengo responded in the home half of the frame with an RBI double by Mason Rogers that scored Wyatt Hale, who served as a courtesy runner after Chris Sammons’ two-out double. Trevor Johnson ripped a single to score Rogers and tie the game.

Marengo loaded the bases with no outs in the third inning before tournament MVP Rod Boykin dove to rob Johnson of a hit before popping to his feet and firing to second for an inning-ending double play to nullify the threat.

Marengo returned the favor in the fourth when Rabe Hale started a 4-6-3 double play to end a bases loaded threat from Edgewood.

What had seemed a prize fight for four innings turned into a mugging in the fifth when Edgewood plated seven runs on only two hits, using four walks, a hit batsman and two errors to help its cause. The big offensive blow came from Taylor Hawthorne, who ripped a two-RBI double to plate Cole Lipscomb and Matt Moore.

Trailing 9-2, Marengo picked up another run in the fifth when Johnson doubled Rogers home on a ball that nearly found its way out of Paterson Field.

Marengo remained quiet until the seventh when it mounted a rally that saw Sammons double home Rabe Hale. Two runs then scored on an errant throw by Ingram before Jacob Dunn singled in Johnson to leave the game at 12-7.

Marengo struck first in game two when Rabe Hale hit a first inning double before coming around to score on a Rogers double.

Rogers pitched into and out of trouble in the home half of the first to keep his team up before Jamey Clements added to the lead in the second with a double that scored Matt Wallace.

Edgewood fired back with five runs in the second inning, the biggest shot coming with Hawthorne’s two-RBI single. Edgewood then added nine runs in the bottom of the third to put the game away.

Sammons, Johnson and Rogers each earned all-tournament honors for the Longhorns. Marengo Academy graduates seven of the nine starters from Tuesday’s game.