Hornets’ Bennett signs to be an Eagle 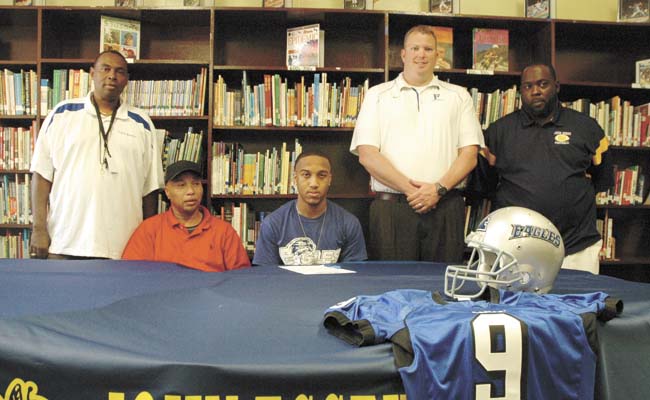 Bennett, who inked a commitment to NCAA Division II school Lane College on National Signing Day, found himself less than comfortable being six hours from home during a visit to the Jackson, Tenn. campus. As he and John Essex head coach Jerome Antone were returning the rental car they used for the trip, the duo met Faulkner University offensive coordinator Corey Fipps, who was returning his rental vehicle after traveling to Florida to sign a player.

The meeting led to a conversation which led to Fipps visiting John Essex High and watching film on Bennett, who soon returned the favor with a trip to the Faulkner University campus.

“We presented him with an offer and scheduled (Thursday) to come sign him to a scholarship,” Fipps said plainly.

“I feel as though it was meant for A.J. to attend Faulkner University,” Antone said. “I feel he is in a better situation. It is just a great day for him and his family.”

Bennett, a two-time all-state wide receiver who also played defensive back for the Hornets, will get his crack at finding playing time on the offensive side of the ball for the Eagles.

“We feel like he’ll have a chance to compete for our H-receiver, which is an inside slot receiver, spot,” Fipps said. “He’s got a lot of upside.”

Fipps said Bennett, who has had four head coaches during his high school tenure, is raw but that all of the areas where he needs improvement are coachable.

“A.J. knows he’s going to have to go there and work,” Antone said of the first John Essex football signee in recent memory.

Bennett, who played basketball for Essex, will also benefit from getting to focus on one sport for the first time.

“For the first time in his life, he is going to have a real offseason,” Fipps said.

In Faulkner, Bennett lands with a Christian school affiliated with the churches of Christ. As such, he walks into an environment that seeks to maintain a high standard.

“We really want to get not only the best athlete we can find, but also find a kid who is a high character kid who can fit into our Christian environment,” Fipps said.

Bennett said the environment made his decision easy.

“It was all about family. It’s all about getting an education,” Bennett said. “When I went to Faulkner, I talked with some of the players and coaches and it was like we had known each other for a long time.”

The move to the Montgomery institution also puts him closer to home.

“Now my mom and dad can come down every Saturday we have a home game and watch me play,” Bennett said.