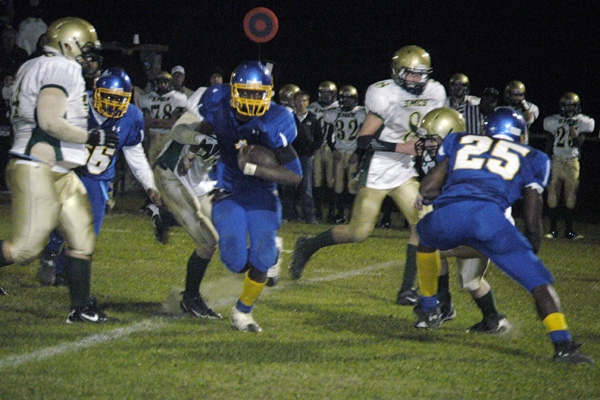 Second year Hornets coach Jerome Antone said earlier this week he would look to his ground game to carry the team Friday night, but with leading rusher Denzell Charleston a late scratch from the lineup, he had to think on his feet.

“Offensively, you have to take what the defense will give you,” he said. “They gave us the passing game and we used that to open up the running game.”

Tripp shared the spotlight with his defense who not only pitched a shutout but recovered two fumbles for touchdowns and allowed less than 250 yards total offense for the Eagles.

“We may be small, but we can make some noise,” Antone said of the 13 players who suited up in the Hornet blue and yellow. “I’m really proud of these guys.”

The first quarter came to an end with neither team cracking the scoreboard, and the Hornets needed nearly four minutes of the second quarter to make their mark.

Tripp found Markiese Tucker on a 17-yard strike to take a 6-0 lead. Three minutes later, Tripp found senior Terry Fountain in the back of the end zone for a 6-yard score and the 12-0 lead.

With just more than a minute left in the half, Tripp found Fountain again for what would have been a 15-yard gain, but Fountain shed tacklers for another 30 yards and headed to the end zone for his second touchdown on the night, giving the Hornets a 20-0 halftime lead.

John Essex wasted no time hitting the scoreboard again to open the third, taking three pass plays and less than a minute to connect Tripp and and Jaylon Worthy for a 20 yard score and a 26-0 lead.

The Hornet defense took over from there.

Following the ensuing kick, Demarcus Bennett recovered a fumble and took it 25 yards for the score with 11 minutes left in the third and the 32-0 lead.

The Hornets offense took their next possession to the Eagles’ 5 yard line before fumbling the ball away. On Shades Mountain’s next play, Tucker blasted through the line and forced a fumble that Cintrell Scott recovered in the end zone for the game’s final score.

The Hornets travel to R.C. Hatch next week for their final game of the season.