Linden breezes past Autaugaville in Round 1 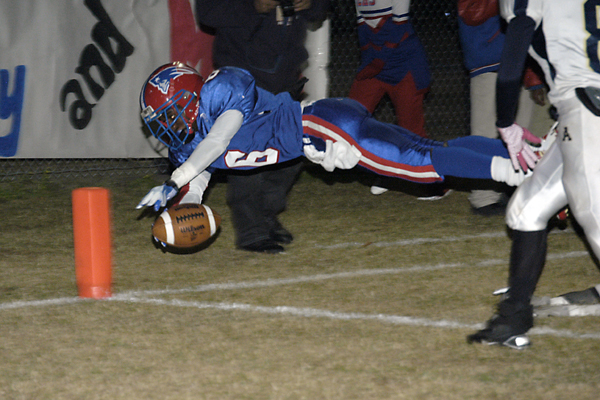 DIXON’S MILLS – Linden (10-1) breezed through the first round of the 1A playoffs with a 40-6 romp over Autaugaville Friday night.

Linden proved to be the stars of the night, holding the Eagles to less than 100 yards total offense and forcing 15 consecutive incompletions in the first half while plucking two interceptions along the way.

The Patriots opened the game by forcing an Eagle three and out and a seven yard punt.

Linden set up camp on the Eagle 20 and Jamal Lewis took the first handoff 19 yards to the one. Anthony Robinson capped the two-play drive with a 1 yard sneak for the score.

The Patriots poured it on from there.

Robinson picked off a pass on the Eagles’ ensuing possession and Lewis capped the drive with a 6 yard score. The Pats struck again on their next drive, this time on a 30 yard run by Julian Little that gave Linden a 21-0 lead.

Terris Lewis picked off an Eagle pass on the ensuing drive and Robinson wasted little time banking it for a 14 yard score, giving the Patriots a 27-0 edge with 2 minutes left in the first quarter.

On the kickoff, Ryan Preston recovered the onside kick and Linden marched it 50 yards before Little found the end zone again.

The first quarter came to a close with the Patriots holding a 33-0 lead.

Less than two minutes into the second quarter, Robinson thundered 56 yards for another score, giving the Patriots a 40-0 lead.

The Eagles finally hit the scoreboard late in the second quarter on a 37 yard bomb from sophomore QB .

With Linden holding a 34 point lead, and only giving up 79 yards to the Eagle offense, the final two quarters were scoreless and 4 minutes each.

Robinson led the rushing attack with 91 yards. The junior quarterback did not attempt a pass all night. Marquis Shelton followed with 75 yards on five carries.

Little finished the night with 68 yards on the ground on 11 carries and Jamal Lewis was a close third with 61 yards on five carries.

Linden will face Pleasant Home on the road next Friday.