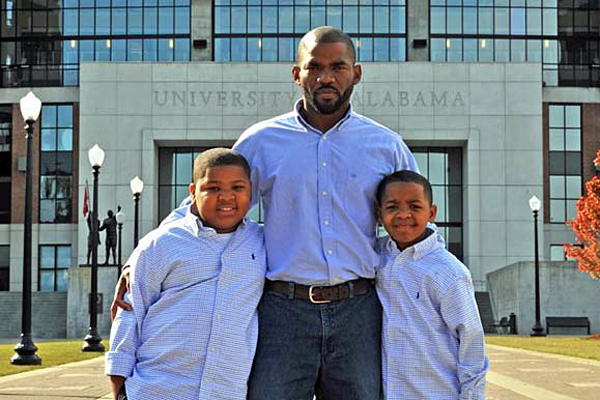 Stacey Watters with his sons Quinton and Jai.

Watters’ other son, Jai, 7, is reportedly in critical condition at Arnold Palmer Hospital.

Watters, 38, and his sons were returning from a cruise vacation they had taken with family when their vehicle was struck by a box truck, according to Orlando NBC affiliate WESH-TV.

“He was a great guy, a great father and a great friend,” James Rutherford, Watters’ assistant coach and long-time friend, said. “We’ve been best friends since college. I’m going to miss him. He was like my brother. We read the bible together, mentored each other. I loved him like my brother. He was the hardest working man, besides my father, I ever met. I can honestly say I loved him.”

“Just need to give the family prayers and everything at this time. He loved them boys. He really loved them boys,” Linden head coach Andro Williams, another of Watters’ close friends, said. “He brought a lot more than just football. He brought a different mentality and a different perspective to different things. My first time meeting him was in college. We were playing an intramural softball game. We got into it because I wanted to win. Me and him have been friends ever since then. He just had a passion for what he was doing, a passion for living. He was a real good friend of mine. You could respect who he was and how he did the things that he did.”

WESH also reports that the father and two sons had apparently been separated from other family members who had also gotten off the cruise ship.

Watters was the head coach of Carroll High School in Ozark, where he went 3-7 in 2011, his first year with the program.

Rutherford, a Sweet Water native and former head coach at Marengo High School, went to Ozark prior to the 2011 season to join Watters’ staff at Carroll.

“We always said that if one of us got the chance to hire the other one we would. He hired me,” Rutherford said.

Watters, 38, is a native of Melvin, Ala. and a graduate of the University of West Alabama. He was an assistant coach at Linden High School in 2010 after serving as the head coach at Sumter County from 2004 to 2008.