A.L. Johnson gets past Ellwood 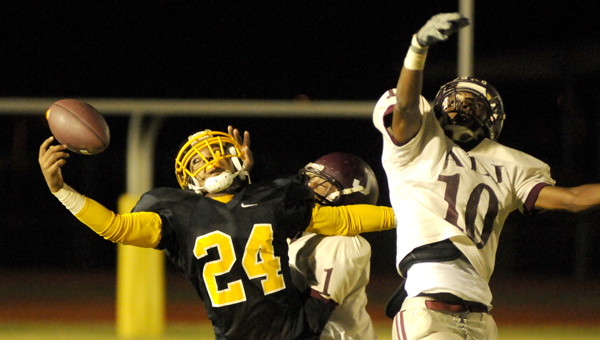 Ellwood Christian’s Devonte Cleveland (24) tries to haul in a pass over A.L. Johnson’s Jeremy Mitchell (10) and Demarcus Woods (1) during Thursday’s game in Selma.

A.L. Johnson (3-2, 1-2) struck first on a drive where an Ellwood muffed punt set them up on the right side of the 50-yard line, when quarterback Demarcus Woods went in from 5-yards out with 7:26 left in the first.

Woods ran it in from 12-yards out after a penalty on the 2-point conversion, and gave A.L. Johnson an 8-0 lead. Ellwood got a spark when Jmiere Solomon picked off Woods’ pass with 3:16 left in the first quarter.

The interception started a drive that ended with a 26-yard touchdown pass from quarterback Jalen Furlow to Devonte Cleveland with 11:51 left in the second quarter. Ellwood didn’t convert the 2-point conversion, making it an 8-6 game.

Ellwood was able to maintain momentum, as Furlow capped off another drive with a 5-yard touchdown run with 3:30 left in the third quarter, as Marquis Gullet added the extra point to give Ellwood its first lead of the game at 13-8.

A.L. Johnson was down, but not out, as running back Castillo Huggins pounded the ball in from 3-yards out with 6:59 left to play, putting his team ahead 14-13.

Ellwood turned the ball over on downs its next drive, but got a break on defense, as Deriaun Glenn recovered an A.L. Johnson fumble and returned it into A.L. Johnson territory at the 41-yard line with 4:51 left in the game.

A.L. Johnson travels to Linden next week to take on the Patriots.