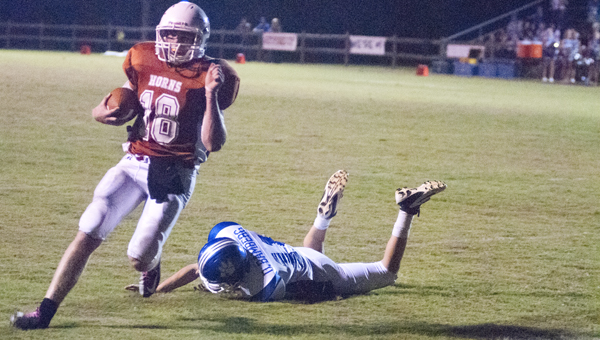 Hayden Huckabee gets the edge on a Southern Academy defender to score a touchdown Thursday night.

The Longhorns began the game with a bang as Josh Holifield ran the opening kickoff back for a touchdown and took a 7-0 lead over the Cougars.

Marengo Academy never looked back after that, as the defense was dominant all night, holding Southern Academy to just 143 total yards in the game.

With 6:19 to play in the first quarter, Hayden Huckabee broke a 37-yard touchdown run to make the score 14-0.

Early in the second quarter, a long run by Tyler Barkley put the Longhorns on top 21-0.

A 5-yard run by Huckabee with 4:07 to go in the half capped off a Longhorns drive to make the score 28-0, and that held going into halftime.

With 2:21 to play in the third, Huckabee took a snap on a fake punt and ran it 40 yards for a TD to make the score 35-0. This would end up being the final score of the night for the Longhorns.

With 3:01 left in the game, Southern Academy finally got on the scoreboard with a 35-yard passing TD. They converted the 2-point conversion to make the score 35-8, which was the final score.

Head coach Robby James was happy with how his team executed and felt that the win will help going into the playoffs next week.

“Any time you win,” he said, “it gives you some momentum going into the next week. We did a good job of eliminating mistakes tonight.”

The Longhorns host Abbeville Christian next Friday in the first round of the AISA playoffs.

“Abbeville is more of a spread passing attack,” James said, “and we haven’t seen many passing teams this year. We need to sharpen up on that this week.”