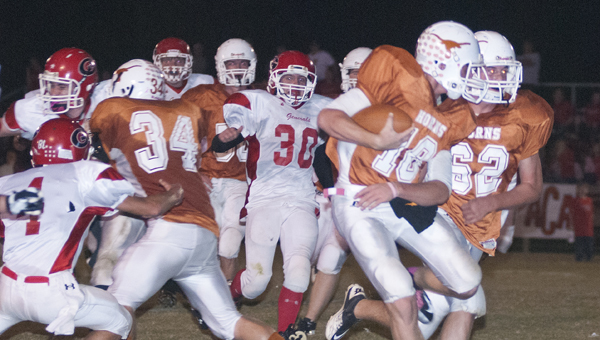 The Marengo Academy Longhorns defeated the Abbeville Christian Generals on Friday night 15-13 in a game with a questionable call near the end.

Both defenses played as well as they could, with few mistakes on either side.

Hayden Huckabee led the Longhorns all night and started off the scoring with 2:21 to go in the first quarter on a 21-yard run. A missed extra point left the Longhorns ahead 6-0.

Teams traded possessions throughout the second quarter, but with 37.2 to go in the first half, the game got more exciting. The Generals scored on an 18-yard TD pass and took a 7-6 lead, but after a touchback, Marengo Academy answered.

Huckabee took a handoff 80 yards for a touchdown to give the Longhorns a 12-7 lead following a failed 2-point conversion.

In the second half, Abbeville Christian took the lead with 49.3 seconds to go in the third quarter. A blocked extra point put the score at 13-12 after three quarters.

Marengo Academy drove down the field on their next drive and Brant Lewis gave the Longhorns the lead on a 23-yard field goal.

With 35 seconds to go in the game, the Longhorns had all but sealed the game, but Josh Holifield fumbled the ball. The Generals returned it for a touchdown, but an official blew the ball dead before the fumble. Marengo Academy was awarded the ball.

The Generals had one more chance when they took over with 16.7 seconds to go, but they were unable to score and the Longhorns advance to the second round of the playoffs.

“That’s the first time I’ve ever seen a game end like that,” head coach Robby James said. “I heard the whistle, but I would have hated to lose that way too. Both teams played well. I’m proud of how well our guys played for not seeing much of a spread offense before.”

The Longhorns finished the game with 210 total yards, 165 of which were on the ground.

Huckabee led the team in rushing with 158 yards on 17 carries. Hayden Hall led the team on defense with 8 tackles and 2 assists.

Marengo Academy will go on the road next week to face Restoration.