Fire at Newton Tire on Highway 80 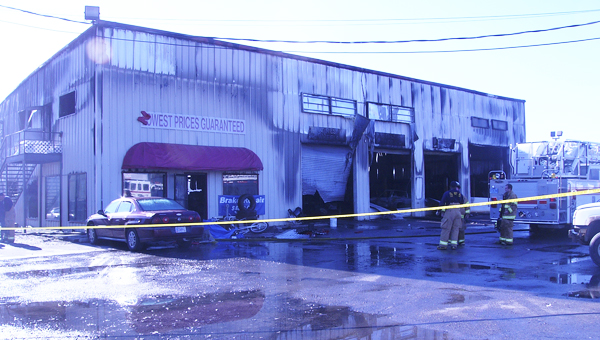 A fire occurred Tuesday morning around 2 a.m. at Newton Tire.

The Demopolis Fire Department responded to a call around 2 a.m. Tuesday morning calling for off-duty and on-duty firefighters to tend to a fire at Newton Tire on Highway 80.

“The state fire marshal is here now investigating the cause of the fire,” Interim Fire Chief Tommy Tate said. “We will work along with him and the Demopolis Police Department in the investigation.”

As of now, the building is looking to be a total loss, he said.

“The guys did a great job fighting the fire,” Tate said. “There are no injuries to report.”

The Econo Lodge Inn & Suites is located next to Newton Tire and their structure didn’t suffer any damages, manager Minette Henson said.

She said their clerk, Greg Shipp, was on duty at the time of the fire and a person banged on their door around 2 a.m. alerting him to call 911.

Henson said she applauds the effort of the fire department in containing the fire as well as the quick thinking of Shipp in evacuating their hotel.

Henson said the structures are very close, about 35 feet apart, so she is thankful everyone is safe.

There were about 40 people in their hotel at the time and the guests were relocated to the Comfort Inn for the night.

The hotel lost power from about 2 a.m to around 4 a.m. when power was restored.

Tate said the fire was mostly at the rear of the building.

“It was a good fire fight,” he said. “It took about an hour to control the fire, it didn’t spread. There was just a lot of smoke from the tires.”

He said about 10-12 guys helped put out the fire and they will continue to investigate the cause.

“You can imagine it was kind of hard to wake up from a sound sleep and minutes later be fighting a fire,” he said. “But, I definitely commend the guys.”