Two girls’ basketball teams in Marengo County are off to undefeated starts this season. The Marengo Academy girls are 16-0 and the Marengo High School girls are 10-0.

Marengo Academy’s head coach Danny Stenz said his team’s speed has been a big part of their success this season.

“We have some really good players and athletes on this team,” he said. “We have a good combination of height and speed. Everybody’s quick and we’re able to push the ball up the court and score quick baskets. We try not to get into offensive sets if we can help it.”

On their way to the 16-0 start, the AISA 1A Longhorns have defeated some quality opponents, including 3A teams Kingwood Christian and Escambia Academy, and 2A schools Clarke Prep, Pickens Academy, Southern Academy, South Choctaw Academy and Wilcox Academy. 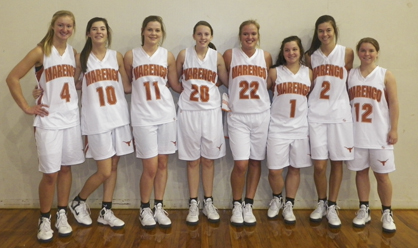 Stenz said his team has been rebounding well and playing good defense to help contribute to their good start to the season.

“I expected us to be good this season,” he said, “but I never imagined we’d start with 16 straight wins. We’ve played some good teams and had some good games. We had to come back late in the fourth quarter to defeat Wilcox earlier this season.”

He added that the team’s success isn’t due to one or two players leading the team, but a team effort.

“This whole season so far has been a team effort,” Stenz said. “All of our players have stepped up and played well. We don’t have a lot of depth, so everybody has contributed. I have told them all year that I would rather have five players score 12 points a game than have one score 20, one score 15, one score 8 and so on. We have been very consistent.”

Stenz also believes his team will be ready at the end of the month when the region tournament begins.

“The tournament we played over the holidays helped prepare us for that stretch run at the end of the season,” he said. “I think we will be ready for the stretch. We just have to work on staying out of foul trouble, and we will be fine.”

The Lady Longhorns are currently the No. 5 team in the Alabama Sports Writers Association top-10 AISA poll.

In Dixons Mills, the Marengo Lady Panthers are quietly setting themselves up for a postseason run. Their 10-0 start has them sitting at No. 2 in the Class 1A rankings with less than a month to play in the season.

Head coach Marilyn Miller said her team has been working and playing hard all season.

“The girls have been working really hard, and playing hard as well,” Miller said. “We have played a couple of good teams, and some that aren’t quite as good, but the team wants to go undefeated and win a championship, and they are working hard for that.”

Miller added that all of the players, even the young ones, have been working hard all season long.

“It has been a team effort this year,” she said. “Everybody is giving 100 percent during the games and in practice. They are definitely exceeding my expectations, but I’ll take it. They work hard at everything they do.”

Marengo has several big area games left this season, and Miller said those are important so they can host the area tournament in February. 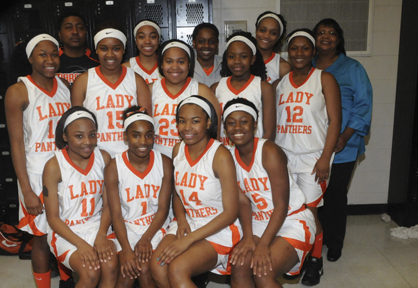 “We need to win these games so we can host the area tournament,” she said. “We have to keep working hard. Our hard work and our mindset have gotten us to where we are and we need that to carry us through the rest of the season. I just want to thank the girls and coach John Agee for their hard work all season for us. Coach Agee works just as hard, if not harder, than I do for this team.”

The area tournaments begin on Monday, Feb. 4 and continue on Feb. 7 and Feb. 9.

Both teams played Friday night, and their records do not reflect those games. Marengo Academy traveled to South Choctaw and Marengo High traveled to St. Luke’s in Mobile.