He was preceded in death by his parents, Ralph and Lyda Spruell. 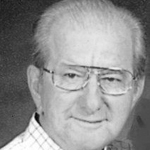 He was a beloved husband, father, grandfather, great-grandfather, uncle, friend, and neighbor. He worked at Gulf States Paper Corporation in Demopolis for over 30 years. He was a veteran of World War II and an avid University of Alabama fan.

In lieu of flowers, the family requests that donations be made to a favorite charity .