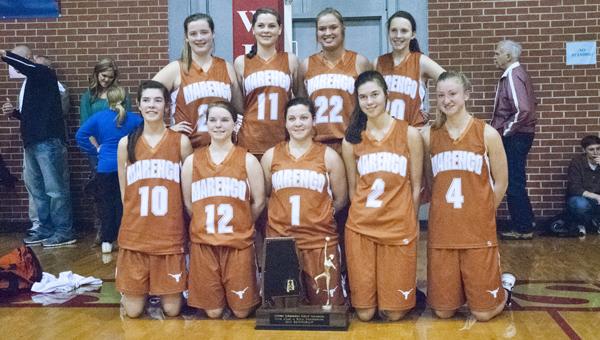 The Marengo Academy Lady Longhorns are AISA Class A runners-up after falling to Lakeside, 54-45, in Thursday’s title game at Huntingdon College in Montgomery.

The Marengo Academy Lady Longhorns are AISA Class A runners-up. They fell to the Lakeside Lady Chiefs in the state championship game Thursday night at Huntingdon College in Montgomery, 54-45. This is the third straight state title for the Lady Chiefs.

Chandler Stenz led the way for the Lady Horns with 19 points, but it wasn’t enough to overcome Lakeside’s powerful scoring attack.

In the first quarter, Kayla Mullis led Lakeside with three three-pointers to give the Chiefs a 13-9 lead heading into the second quarter.

The Lady Horns responded in the second quarter to take a one-point lead into halftime. Even still, the game felt as if Marengo had to battle uphill throughout.

Stenz led the Longhorns with 10 points at halftime.

Marengo struggled to find the basket in the third quarter, only scoring six points, and giving up 11. Marengo Academy trailed by four, 32-28, heading into the final quarter.

In the final quarter, Marengo was able to pull the game close several times, but could not string together enough defensive stops to overcome the Chiefs. The final score in the game was 54-45. Lakeside’s final six points came at the free throw line.

“We had a hard time catching up with their point guard,” he said. “We couldn’t keep her from driving the lane. Our foul situation hurt us as well. It seemed like most of the calls went against us.”

He added that, in the fourth quarter, the inability to get stops on defense was the deciding factor.

“Every time we got close to them, we couldn’t get a stop on the other end,” he said.

He also said that his team finishing 25-3 was a great accomplishment, and that they are going to work to get back there next season.

“We’ve never been this far before,” he said, “and we’re bringing back our core next year. We’re going to work hard to be in the same spot next year.”

Brooke Smyly finished the game with 10 points for the Lady Horns behind Stenz’s 19. Andrea Edmonds added 8, and Conner Etheridge and Anna Michael Crocker both finished with four.