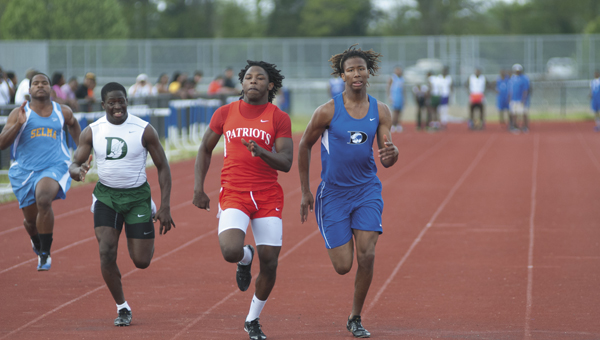 Demopolis’ Rodney Harper and Linden’s Marquise Shelton race neck-and-neck to the finish the one of the 100-meter dash heats.

In only their second meet of the season, the Demopolis High School track team played host to seven other teams Tuesday afternoon, including three other teams from Marengo County, and all four local schools performed well.

In the girls 100-meter hurdles, Demopolis’ Jasmine Campbell came in second, and Linden’s Samone Jackson came in third. On the boys side, Linden’s Cordarius Scruggs brought home a bronze.

Tyler Coleman from Demopolis and Samuel Monroe from Linden placed first and second, respectively in the boys 100-meter dash, while Alexis Johnson and Tomysha Boykins finished second and third on the girls side.

Gracie Boykin of Demopolis ran away from the rest of the field in the girls 1600-meter run, and finished with a time of 6:24. The Tigers’ Victoria Webb brought home the silver in the event with a time of 7:04.

The girls 400-meter dash saw Keondra Bouler from Marengo High bring home the gold with a time of 1:06. Demopolis’ Darneshia Harris came in second, and A.L. Johnson’s Tiffany Barber came in third. On the boys side, Demopolis’ Cortez Lewis came in first with a time of 54.75 seconds. He was followed by Kynard Craig of Linden and Charles Edward of A.L. Johnson.

Quintavious Parker of Demopolis brought home the bronze in the 300-meter hurdles on the boys side, and Alexis Johnson from Linden, Boykins from Linden and Campbell from Demopolis took gold, silver and bronze, respectively.

Keishelle Clark of Marengo High took the gold and Cierra Jones of Linden took bronze in the girls 200-meter dash. Demopolis’ Coleman and Harper brought home gold and silver on the boys side.

In the boys 800-meter run, Goins of Linden and Pearson of Demopolis took gold and silver, respectively.

Tommy Wilson of Demopolis earned first place in the boys high jump with a height of 5-feet, 8-inches.