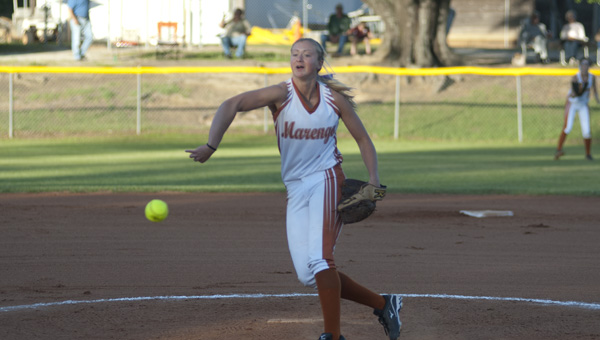 Marengo Academy’s Andrea Edmonds pitched a perfect game Thursday night in a 10-0 win over Jackson Academy in the second round of the AISA regional playoffs.

Edmunds struck out the side in the top of the first inning, and the Lady Longhorns jumped out to a 3-0 lead in the bottom half of the inning.

Chandler Stenz opened the game with a single, and was moved over on a bunt by Anna Michael Crocker. Katie Tucker doubled to bring in Stenz, then Reesa Holifield doubled to score Tucker. Connor Etheridge also doubled in the inning, scoring Holifield.

Both teams went three up, three down in the second inning, and Edmonds added her fourth strikeout of the game.

In the third, it looked as if Edmonds’ bid for a perfect game would be broken up by a line drive to right field, but right fielder Taylor Barley gunned down the runner at first base to keep the perfect game going.

Marengo Academy added two more runs in the bottom of the third. Etheridge added two more RBIs to her total on a double that scored Crocker and Tucker.

Edmonds struck out two more batters in the top of the fourth to bring her total up to six. In the bottom half of the inning, the Lady Longhorns offense exploded for five more runs. Crocker drove in two runs on a single, Tucker drove in a run with a triple, Holifield added another RBI, and Edmonds singled in another run to give the Lady Longhorns a 10-0 lead after four innings.

Edmonds pitched a drama-free top half of the fifth and struck out two of the three batters she faced to end the game and secure the perfect game. She had eight strikeouts on the night.

“Andrea was great for us tonight,” head coach Danny Stenz said. “She pitched lights out, and Taylor Barley in right made a heck of a play to help her out.”

Stenz said the coaches have been preaching hitting line drives and not popping the ball up, and that the girls need to continue to do that down the stretch.

“We swung at a few bad pitches tonight, and we’ve got to get out of swinging at those,” he said. “We need to continue hitting line drives and get out of hitting pop ups.”

Marengo Academy will play Friday night at 6 p.m. for the region championship at Scott Field in Linden.