The Marengo Academy golf team finished their 2013 season with a record of 15-3-1.

This year’s team was young, as they had two freshmen, Thomas Etheridge and Gabriel Hale; two eighth-graders, Cameron Peppenhorst and Joseph Pugh; and a seventh-grader, Hutson Breckenridge. 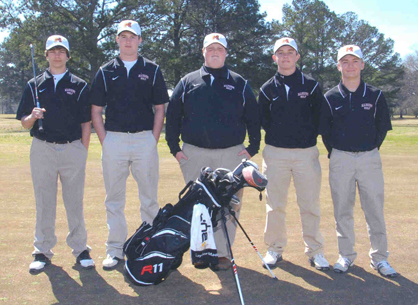 Photo courtesy of Fleming Photography. Shown are the members of the Marengo Academy golf team.

Breckenridge was the only player to qualify for the AISA state tournament as an individual player. The state tournament was held April 29-30 at the Selma Country Club. He shot a 191 for the tournament. The winner, Davis Thompson from Lee-Scott Academy, shot a 149.

The Marengo Academy golf team is coached by Charles Moore and Rusty Vick.