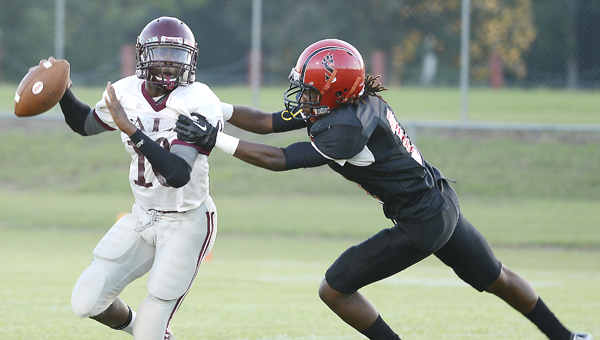 By Daniel Evans
The Selma Times-Journal

In order to take the next step and compete for a playoff spot, Southside head coach Daniel Flowers knew his team would have to run the ball better in 2013. Thursday night in Southside’s 22-8 victory against A.L. Johnson in the team’s jamboree, work on the ground attack showed with 247 yards from a platoon of ballcarriers.

“We want to change our mindset from last year. Last year, we were mostly a pass happy offense,” Flowers said. “This game we threw the ball six times. The team that is physical is going to win football games.”

The Panthers ran early and often, rushing 36 times and giving the ball to seven different ballcarriers. During the majority of the game, Southside took advantage of its physicality on the offensive line and went to a single wing set that featured a lot of quarterback draws.

Flowers said the Panthers put that offense in recently, mainly for use in the jamboree.

Damian Watts led the way with 99 yards on just 15 carries and a touchdown. Casey Pullom also had a breakout game with 84 yards on five carries, including a 60-yard-run in the second quarter.

After a first quarter dominated by penalties and dormant offenses, the game seemed destined to be scoreless at halftime. However, with two minutes left in the opening half, the first game jitters subsided and both offenses came alive.

Derrick Daniels scored on a ten-yard run to give Southside the game’s first points with exactly 2:00 to play in the first half. On the two-point conversion attempt, Khamari Gibbs’ pass was deflected into the air and caught by De’Vonte Alexander to give the Panthers an 8-0 lead.

With time ticking away in the first half, A.L. Johnson quarterback Ladarius Carr threw an interception that was returned 45 yards for a touchdown by eight grader DeQuan Johnson, giving Southside a 14-0 lead with just over one minute to play before halftime. The two-point conversion attempt was stopped short of the goal line.

On the next possession, Carr made up for his interception with an incredible play to end the half. With the ball at the Southside 25-yard-line, Carr danced around the pocket and avoided defender after defender before launching a touchdown pass to Charles Edwards to get the Eagles on the scoreboard as the half ended. A two point conversion brought A. L. Johnson within 14-8 at halftime, but that was as close as the Eagles would get the rest of the game.

Flowers appeared content to run the football most of the second half, giving the Eagles defense a heavy dose of Gibbs, Daniels, and Watts. With just over three minutes to play in the third quarter, Watts dashed for a 20-yard-touchdown run, giving Southside a 22-8 lead after a failed two-point try.

“I thought we did some fairly good things. We turned it over way too much [though].” Jones said, referring to his teams three turnovers in the ballgame.

On the night, Carr was 7 of 17 passing for 93 yards, a touchdown and two interceptions.

Although there were a lot of highlights for the Panthers Thursday night, penalties were a problem early on. Southside had 12 penalties overall, with 11 of those coming in the first half.

“We have practiced twice on the field the last two weeks because the rain kept raining us out,” Flowers said, pointing out why the Panthers might have had more penalties than he wanted. “The only work we were doing was in the gym. We looked just like we practiced. We’ve had two practices and we looked like it.”

Kickoffs were not live during the contest, but each team did kick off during the game to work in a touch of special teams. Punting was not live, with officials walking off punt yardage.

A.L. Johnson kicks off their regular season next Friday on the road at R.C. Hatch.