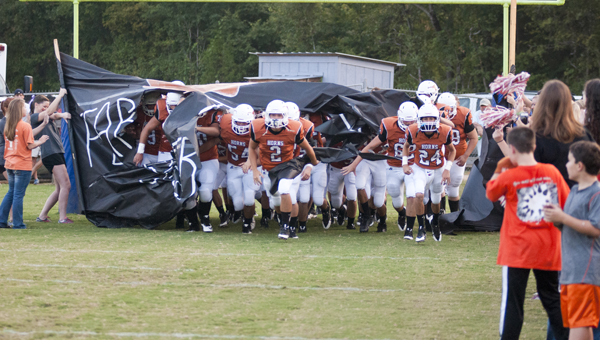 The Marengo Academy Longhorns opened their season with a 34-6 win over South Choctaw Academy.

The ground attack was the name of the game for the Marengo Academy Longhorns on Thursday night as they defeated the South Choctaw Rebels 34-6 in their season opener.

The Longhorns jumped out to an early lead and never looked back, as they amassed 315 yards on the ground in the game.

“We ran the ball a lot more than we planned,” head coach Robby James said, “but we really didn’t have to throw the ball.”

Cramps plagued the Longhorns in the second half of the game, and James said conditioning and hydration is something he will stress before next week’s game.

“We cramped up a lot, and we weren’t hydrated like we should have been,” he said.

Marengo Academy scored on all three of their first half drives to lead 21-0 at halftime.

The first score of the game came with 3:19 to play in the first quarter on a 7-yard run by Josh Holifield. Holifield led the Longhorns in rushing on the night with 123 yards on 20 carries. 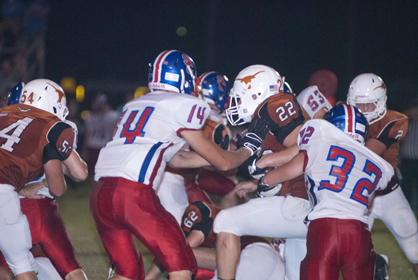 Josh Holifield (#22) led the Longhorns with 123 yards rushing. He had one rushing touchdown.

Sebastian Hale added the second TD of the night with a six-yard scamper with 9:48 to play in the second quarter. This drive was set up by a blocked punt by Shade Pritchett to give Marengo Academy the ball at the South Choctaw 15-yard line. 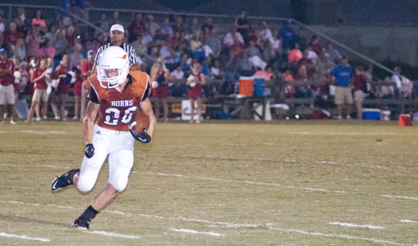 Tyler Barkley connected with Hayden Huckabee on a screen pass that went for 38 yards, which set up the third touchdown of the night for the Longhorns. Hale finished the drive on a 14-yard TD run. 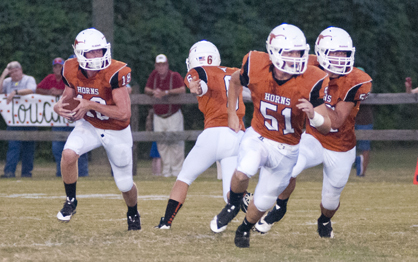 Hayden Huckabee (#18) was second on the team in rushing with 99 yards. He also caught the team’s only catch for 38 yards.

Late in the third quarter, Ralph Langley took his only carry into the endzone from five yards out, giving Marengo Academy a commanding 28-0 lead.

South Choctaw ended the Longhorns’ shutout effort with 1:08 to play in the third quarter on a 62-yard touchdown pass from Justin Whitsett to John Phillips. The Rebels missed the extra point and trailed 28-6.

“We need to work on our secondary,” James said. “We gave up a few big plays, but we’re inexperienced back there. We just need some more work.” 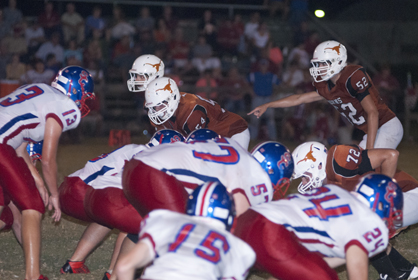 Hayden Hall (#52) led the Longhorns on defense with 12 tackles, a sack and a forced fumble.

The Longhorns added their final touchdown of the night with just 28.3 seconds left in the game. Barkley ran it in from one yard out to give the Longhorns a 34-6 lead.

Hayden Hall led the Longhorns defensively with 12 tackles, a sack and a forced fumble.

Huckabee ended the game with 99 rushing yards on 15 carries and one reception for 38 yards.