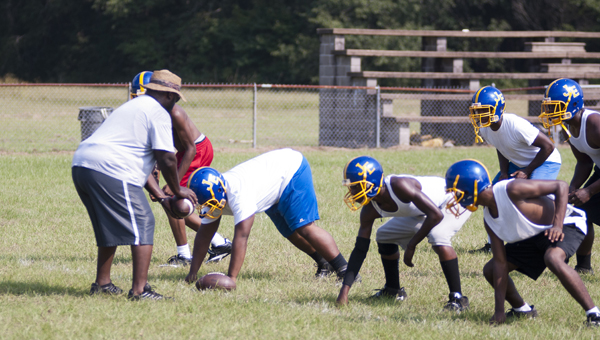 With just 14 players on the roster, nothing will be easy for the John Essex High School football team this season.

Every player will play both offense and defense, and some players will play all 48 minutes. Conditioning will be most important for Keonn Nettles’ Hornets this season.

There was so much uncertainty surrounding the program during the summer that the players and coaches did not know if there would be a team until the first week of August, and the team was not able to hold their first practice until school started on Aug. 19. This puts them two weeks behind the other teams in the state, which started practice on Aug. 5.

“We’re two weeks behind everybody else and our numbers are low, but we’ve had a good two weeks of practice,” Nettles said. “We can’t afford any injuries, so we have to work hard and hope we stay healthy.”

Newcomer Anthony McIntosh has impressed Nettles so far in pre-season camp, and he will be the starter at quarterback for the Hornets.

“Anthony has done a great job in practice, and I expect great things out of him this year,” Nettles said. “All of our seniors have stepped up in practice, and they’re all excited to get back out on the field.”

Nettles said that after how last season ended, with the team not being able to finish the season, the players are excited about the new season and ready to play football again.

“They are very excited considering how last year ended,” he said. “They’re ready to get back out there.”

Lining up in the backfield behind McIntosh will be Tucker. At receiver, Bennett, Essex and Gracie will see a lot of the snaps.

Shawn Essex and Gracie will be defensive ends, and Edwards, Perkins and Williams will be interior defensive lineman. At linebacker, Tucker and Worthy will be the primary starters. In the secondary, McIntosh, Bennett, Timothy Jones and Emmanuel Essex will see most of the action.