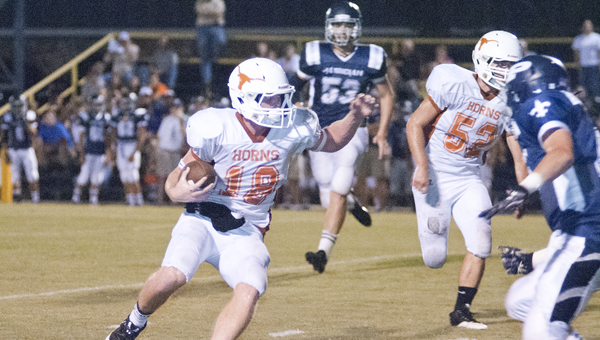 Hayden Huckabee led the Longhorns to a 37-0 victory over Patrician Academy on Thursday. He had 145 yards rushing and three touchdowns.

The Longhorns defense held the Saints to 26 yards in the game, and didn’t allow any scores in their 37-0 victory.

“This was a big win for our program,” head coach Robby James said. “We’ve come a long way over the last few years.”

The Longhorns received the ball to open the game, and they drove down to the Patrician Academy 3-yard line before they were stopped on a fourth down attempt. 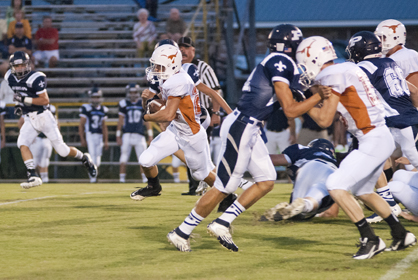 Sebastian Hale found open space against Patrician Academy. He ran for 62 yards in the game.

On Patrician’s second play of the game, backed up into their own endzone, a bad snap forced a fumble that was recovered by Hayden Huckabee for a touchdown for the Longhorns. Marengo Academy then added a two-point conversion with a pass from Huckabee to Cason Cook to go up 8-0.

Early in the second quarter, the Longhorns added their second score of the night on a two-yard TD run by Huckabee to put MA on top 15-0.

With 2:45 to play in the half, Huckabee scored his third touchdown of the night, this time from 41 yards out to put his team on top 22-0.

Patrician’s offense was unable to get a first down on the ensuing drive, and the Longhorns forced a punt, which was returned down to the Saints’ 12-yard line.

With 36 seconds to play before halftime, Tyler Barkley connected with Shade Pritchett on an 11-yard pass for a touchdown to give the Longhorns a 29-0 lead going into the half. 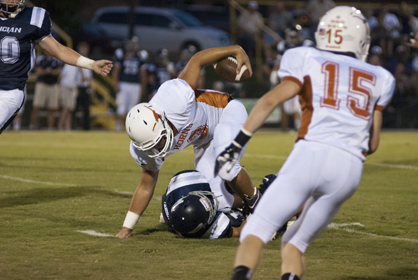 Neither team was able to get in the endzone in the third quarter, but with around 10 minutes to play, the Longhorns scored their final touchdown of the night on a 1-yard run by Josh Holifield.

Pritchett caught four passes for 29 yards and a touchdown, and Cook caught two passes for 20 yards.

“I think we can play with anybody,” James said. “We’re excited about our team and where we are at this point.”

The Longhorns, now 4-0 on the season, will host Wilcox Academy next Friday night. 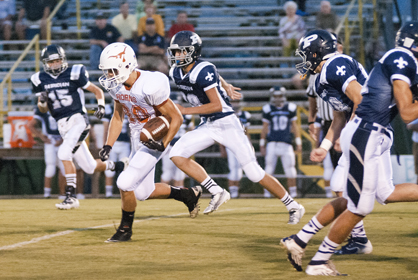