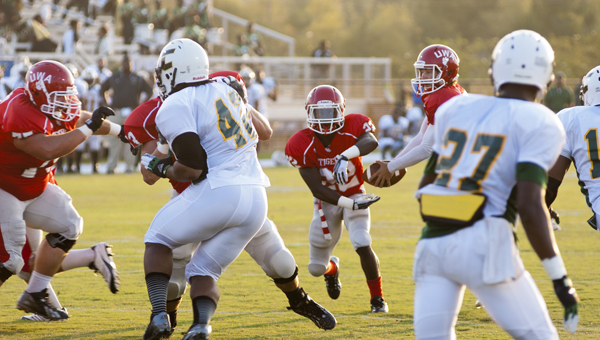 The University of West Alabama football team outmanned and out-muscled Concordia College at Tiger Stadium in Demopolis Thursday night in a 71-14 win.

The Tigers didn’t waste any time getting on the board, as they led the Hornets 10-0 just two minutes into the game. They opened scoring with a field goal by Mark Grant.

On the ensuing kickoff, the returner for Concordia fumbled the ball while getting tackled, and the ball was recovered in the endzone by Stephanio McNair to give UWA a 10-0 lead.

Twelve seconds later, UWA only led by four. Terrell Edwards-Maye returned the Tigers’ kickoff for a touchdown, but the William Sanders extra point attempt was no good, and the Tigers led 10-6 with 12:48 to play in the first quarter.

“I hate that we gave up the kick return,” UWA head coach Will Hall said. “Our expectations are higher than that.”

Less than a minute later, the Tigers were in the endzone again, this time on an 8-yard touchdown pass from Kyle Caldwell to Chad Toocheck to give the Tigers a 17-6 lead with 12 minutes to play in the opening frame. 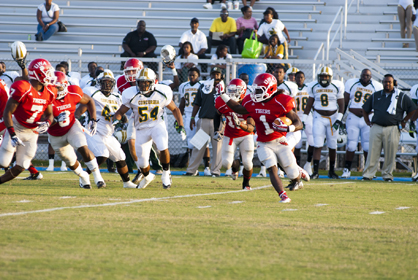 Concordia’s offense get rolling on their next drive, and the Hornets found pay dirt on a 10-yard pass from Cameron Mayfield to Mason Tillman. Their two-point conversion attempt was good, and they pulled within 10 points of the Tigers. Unfortunately for the Hornets, their scoring was done for the night.

UWA had another chance to score in the first quarter, but Caldwell threw an interception in the endzone for the Tigers’ first turnover of the game.

In the second quarter, UWA got back into the endzone with a 44-yard touchdown pass from Caldwell to Seth Roberts to stretch their lead to 31-14 with just over 11 minutes to play in the half.

The final score of the first half came on a 15-yard run by Rhodes to put the Tigers on top 38-14. 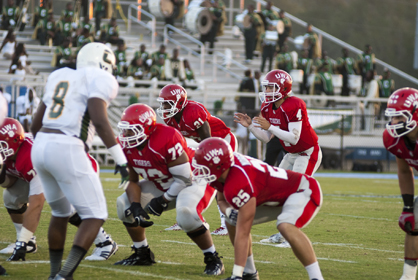 Kyle Caldwell waits for a snap.

“We played sloppy in the first half, but that can be expected in a game like this,” Hall said. “We’re to the point, though, that people are disappointed if we don’t play flawless.”

In the second half, it was all UWA, as the Tigers added five more scores before the final whistle.

The first came on a 14-yard TD pass from Gary Johnston to Javae Swindle to put UWA on top 44-14.

With 3:46 to play in the third quarter, UWA scored on a 19-yard TD pass from Caldwell to Toocheck, who made a one-handed grab in the corner of the endzone.

Johnston opened the fourth quarter with a 13-yard TD run to put UWA up 58-14.

On Concordia’s next drive, Brandon Lilly intercepted a Mayfield pass inside UWA’s 10-yard line and returned it to the Hornets’ 22.

The final score of the game came on a fumble recovery in the endzone after a bobbled snap by Concordia quarterback Jeremy Buffington. The fumble was recovered by UWA defensive tackle Jherron Jones to put the Tigers on top 71-14.

“This game was good for a lot of kids tonight,” Hall said. “A lot of these guys don’t get to play much, and now they’re lettermen and they’re in the record books. It’s really great for them.”

Next week, the Tigers open their Gulf South Conference schedule at home against Delta State.