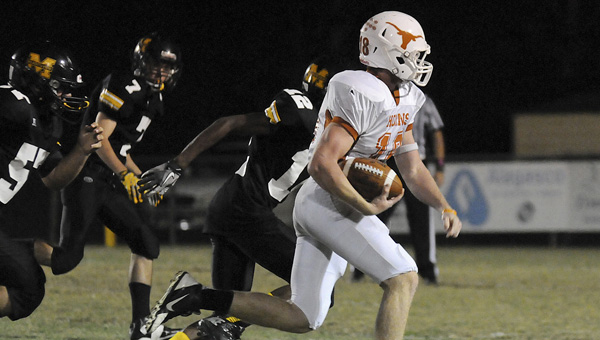 Marengo Academy running back Hayden Huckabee runs past a pack of Meadowview defenders late in the first quarter for a 30-yard touchdown. Marengo Academy cruised to a 57-6 victory over the Trojans.

By Josh Bergeron
The Selma Times-Journal

SELMA — The Marengo Academy Longhorns cruised to a 58-6 victory over the Meadowview Christian School Trojans on Friday after racking up 400 total rushing yards.

On the Marengo Academy side of the field, head coach Robby James said his team played well, but can always improve.

“We just came out and said we aren’t going to make mistakes, we are going control the ball and try to get in the end zone,” James said. “We can improve on a few thing, but we work everyday to be better than the day before.”

Meadowview head coach Lebo Jones said he was disappointed with his team’s first-half performance, but felt the Trojans’ second-half effort was encouraging.

“We played hard in the second half, but we just have to learn how to put a whole game together,” Jones said. “We just have to work on blocking and tackling.”

The Longhorns’ rushing attack got off to a quick start. On the team’s first offensive play, Hayden Huckabee ran 50 yards to the 1-yard line and he subsequently scored with 11:22 left in the first quarter. 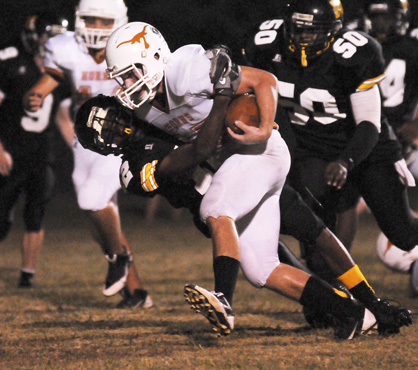 Meadowview Christian Trojan C.J. Grimes tackles Longhorn running back Weldon Aydelott short of the goaline in the first half of Friday’s game. Marengo Academy cruised to a 57-6 victory over the Trojans.

The Longhorn’s defense also got off to a quick start, recovering a fumbled handoff to give the offense the ball on the 16-yard line. The offense scored on an 11-yard run by Josh Holifield.

On the following drive, Longhorn Cason Cook intercepted a Meadowview pass and ran it back 16 yards for a score to put his team up 21-0.

The Longhorns scored three more times to end the first half with a huge lead — 42-0 — and 269 first-half rushing yards.

It wasn’t totally bleak for Meadowview. The Trojans got two first downs at the end of the second quarter, backed up against their own goal line. They also looked to be moving the ball at the start of the third quarter, but turned the ball over after a couple of first downs. The Longhorns subsequently scored to increase the lead to 50-0.

Marengo added one final score with six minutes left in the game and made the two-point conversion.

Meadowview eventually scored with 12 seconds left in the game on a 30-yard run by C.J. Grimes, but missed the two-point conversion to seal the score at 58-6.