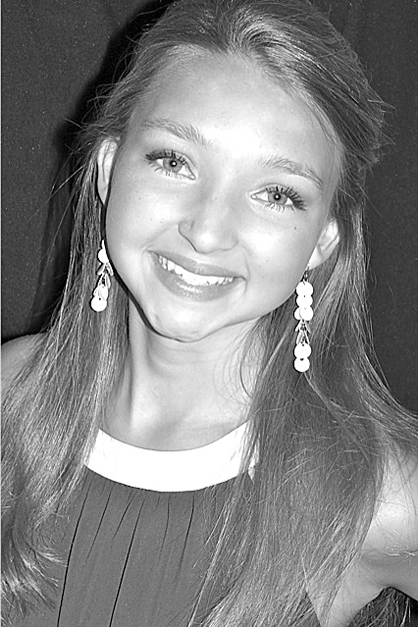 The Junior Beta Club at DMS, in which Colgrove is the president, will host the BEE Her Freedom Adult Spelling Bee on Tuesday, Nov. 5 at 6:30 p.m. at the Demopolis High School auditorium.

Colgrove, 13, said she became knowledgeable about human trafficking about a year ago when DHS graduate Sydney Hasty returned from a mission trip to Uganda.

She found a video on Facebook about a group called “Dress a Girl Around the World,” and she decided to get involved in the organization. Dress a Girl Around the World makes dresses and sews their patch on the front of it so that it’s visible. The idea behind this is that when someone approaches a girl and sees the patch, it will signify that someone is looking out for that girl, and they won’t take her in fear that someone will come looking for her.

“The average age of the girls in human trafficking is 12-14,” Colgrove said. “I’m 13, so these are girls just like me. If I were in their situation, I would want somebody to want to save me. That’s why I want to help end it.”

Colgrove has been named the youth ambassador for the state of Alabama for Dress a Girl Around the World, and she is organizing Dress a Girl events in Demopolis for people to sew dresses.

The BEE Her Freedom Adult Spelling Bee will consist of three-person teams with the goal of raising money for organizations that combat human trafficking, Shared Hope International and A21 Campaign. To compete in the spelling bee, each team was required to raise a minimum of $600 through sponsors and donations. Anyone who donates more than $20 will be given a tax receipt. The team that raises the most money will receive a trophy, and teams will receive a free “FreeBee” for every $200 raised above $600. All of the money raised by the teams will be split to go to the two organizations. Door money, money from concessions and from a silent auction will go to the Junior Beta Club to help with future events.

In the spelling bee, a FreeBee is a way to get the audience involved. A team can ask for help on a word, and the audience can pay $20 to buy the team a FreeBee, which can earn them either a free pass to the next round, the opportunity to ask a friend in the audience to spell the word, or they will be given a new word to spell.

Team check-in for the spelling bee will begin at 5:30 p.m., and the doors will open to the public at 6 p.m. Tickets are $5 for adults and $3 for students.

Awards will also be given for best costumes, most team spirit and the most giving team.