Longhorns storm past Chambers in playoffs 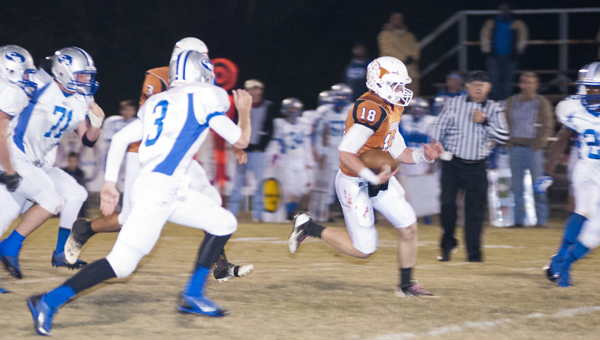 Marengo Academy opened the AISA Class A playoffs with a convincing win over Chambers Academy on Thursday at Linden Athletic Field.

The Longhorns came out on top 51-14, and were never challenged in the game.

“I thought we played really well to start the game,” Marengo Academy head coach Robby James said. “Our offensive line opened up some big holes, and we had a really good offensive showing.”

Shade Pritchett led the way for the Longhorns on the ground with 124 yards on just four carries. He had two touchdown runs in the game to help his team to the big win. 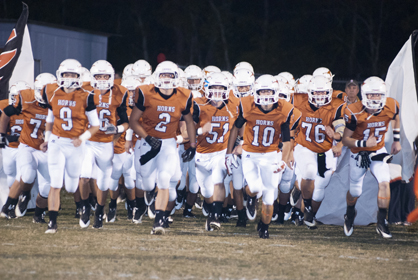 Marengo Academy runs onto the field before the game.

Pritchett’s first touchdown came on Marengo’s first drive when he broke a 56-yard run for a score. Brant Lewis’ extra point was good and the Longhorns took a 7-0 lead.

MA’s defense held strong throughout the game, giving their offense plenty of opportunities to score. Lewis scored from two yards out on the next MA drive, but he missed his first of four extra points in the game.

With 1:06 to play in the opening quarter, Josh Holifield scored from two yards out, giving the Longhorns a 19-0 lead. Ralph Langley forced a fumble on the ensuing kickoff, and Pritchett recovered the fumble, giving Marengo Academy the ball at the Rebels 25 yard line.

Langley was rewarded for forcing the fumble, and he scored on a 30-yard run with 50.1 seconds to play in the first quarter, putting MA ahead 26-0.

With 3:47 to play in the half, Pritchett scored his second touchdown of the game, this time from 47 yards out. Lewis’ extra point was good, and the Longhorns took a 33-0 lead over Chambers.

Marengo Academy got into the endzone one more time before halftime on a four-yard run from Hayden Huckabee to put the Longhorns on top 39-0. 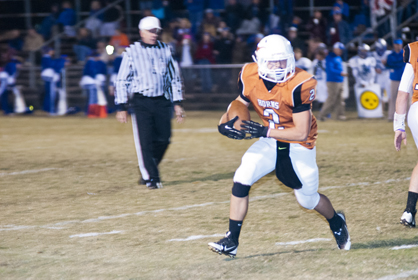 Ralph Langley takes a handoff to the outside Thursday night against Chambers Academy.

To open the second half, the Longhorns drove the ball down the field to add to their lead once again. Lewis finished off the long drive with a three-yard run, making the score 45-0.

Chambers Academy quarterback Cord Dodgen threw an interception that was returned for a touchdown by Alston Dinning, which turned out to be the final score of the game for the Longhorns as they took a 51-0 lead.

Chambers scored twice in the fourth quarter after Marengo Academy put their reserves in the game. Both touchdowns were passes from Dodgen to Quadarius Tinsley. Corey Bolt converted a two-point conversion on one of the scores to make the final 51-14.

“We just have to keep getting better,” James said.

For the game, Marengo Academy had 293 yards on the ground compared to 112 for Chambers. Overall, the Longhorns outgained the Rebels 338 to 222.

The Longhorns will host the winner of Abbeville Christian and Jackson Academy next Friday night at Linden Athletic Field in the AISA semifinals.