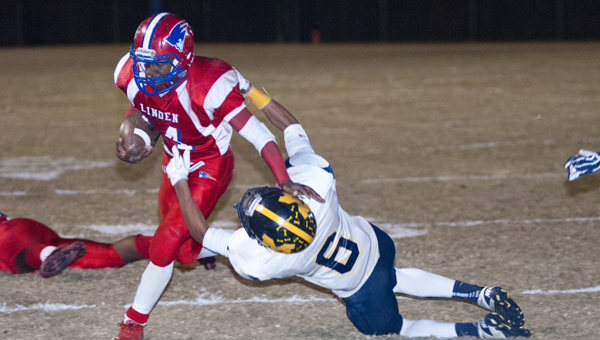 Terrance Sanders breaks a tackle against McKenzie. He had 153 yards and five touchdowns in the game.

The Linden Patriots used a dominating defensive performance in the second half of the game to defeat the McKenzie Tigers 42-16 in the second round of the playoffs.

McKenzie led on two separate occasions in the first half, but Linden proved to be too much for the Tigers in the second half as they Patriots pulled away for the win.

“They took the momentum in the second half,” McKenzie head coach Josh McLendon said. “We stopped them on the first drive of the second half, but we couldn’t get any offense going.” 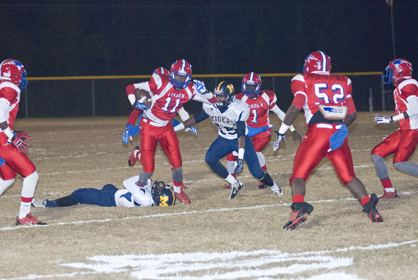 Linden racked up 387 yards on the ground in the game with a majority of the yards going to Prentiss McCuiston and Terrance Sanders. McCuiston ended the game with 197 yards and Sanders had 153.

Linden was the first team to find the endzone as Dewayne Charleston found Sanders on a lateral and Sanders rumbled 26 yards for the score. Charleston converted the extra point to put Linden on top 7-0. Sanders had two touchdown runs called back earlier in the drive because of illegal motion and holding calls against the Patriots.

McKenzie responded on the first play of their next drive with a 69-yard touchdown pass from Terrance Clemons to Condie Pugh. Harper Vinson connected with Pugh on the two-point conversion attempt to give the Tigers an 8-7 lead.

Linden took the lead back with 1:50 to play in the first quarter on a 29-yard pass from Dewayne Charleston to Dequan Charleston. The Patriots converted the two-point conversion on a run by Sanders to give Linden a 15-8 lead. 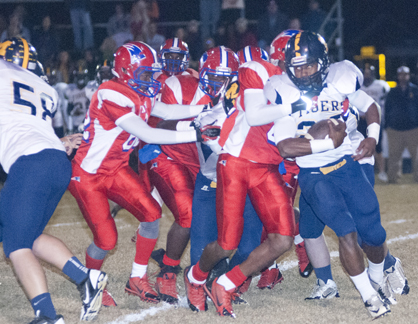 McKenzie’s Anthony Grace is brought down by Linden’s Prentiss McCuiston.

With 11:07 to play in the half, McKenzie grabbed the lead back after a Sanders fumble gave them favorable field position. Anthony Grace ran it in from six yards out, and Vinson ran in the two-point conversion, making the score 16-15 Tigers.

On Linden’s next drive, Sanders punched it in from three yards out to give Linden a 21-16 lead. That score held until halftime.

In the second half, McKenzie had no answer for the Linden offense, and Linden’s defense shut down the Tigers.

Late in the third quarter, Linden took a 29-16 lead on an eight-yard touchdown run by Sanders, his third of the game.

He also scored from four yards out and five yards out in the fourth quarter to give him five touchdowns in the game.

McCuiston carried a bulk of the load during each of the drives, and Sanders was able to finish them off inside the redzone.

“We had a great plan coming into the game, and it took care of itself in the second half,” Linden head coach Andro Williams said. “It’s all about the kids being prepared. We’re still growing up around here, and I feel like we grew up a little tonight.”

McLendon said he was proud of his team’s effort throughout the season.

“I’m proud of my guys,” he said. “We had a great season, and the kids played hard all year.”

With the win, the Patriots advance to the third round of the AHSAA Class A playoffs. They will face the winner of Friday night’s matchup between Maplesville and Geneva County.