With a 44-13 win over Abbeville Christian, the Marengo Academy Longhorns secured a spot in the AISA Class A Championship Game next Friday in Troy.

Hayden Huckabee set the tone of the game early when he took the opening kickoff 93 yards for a touchdown. Huckabee had 260 all-purpose yards in the game.

After jumping out to a 7-0 lead to open the game, the Longhorns defense took over, forcing the Generals to a three-and-out on their opening drive. 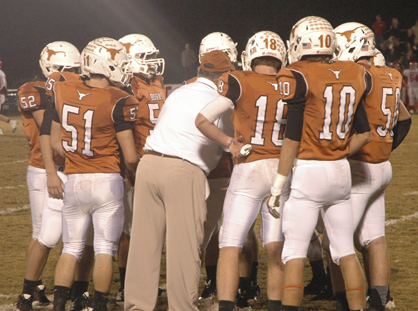 Marengo Academy head coach Robby James coaches his team up during a timeout.

Shade Pritchett scored from seven yards out on the Longhorns next drive, but Brant Lewis missed the extra point, giving Marengo Academy a 13-0 lead.

Generals quarterback Drex Roach was picked off by Andrew Martin on their next drive, but the Longhorns fumbled an exchange on a reverse. Jacob Kirkland recovered the fumble for the Generals, giving them the ball at the MA 27 yard line.

Roach connected with Kyle Helms on a 28-yard touchdown pass to bring the Generals within seven after missing the extra point.

On the next Longhorns drive, they were able to move down the field fairly easily until they got inside the 10. On a third-and-goal play from the 10, Huckabee fumbled, but Cason Cook fell on it for the Longhorns. After a personal foul penalty, Lewis connected on a 37-yard field goal to put the Longhorns on top 16-6 with 1:35 to play in the opening quarter.

Abbeville was unable to move the ball effectively on their next drive and were forced to punt.

Huckabee took a handoff 50 yards for a touchdown on MA’s next drive to give the Longhorns a 23-6 lead.

Hayden Hall made a huge play for the Longhorns defensively on the Generals next drive as he sacked the quarterback, forced a fumble and recovered the fumble at the Generals 31 yard line.

Huckabee connected with Pritchett on the first play of the drive for a 31-yard touchdown pass to put MA on top 30-6, which was the last score of the first half.

Tyler Barkey and Pritchett connected for a 61-yard passing touchdown with four minutes to play in the third quarter, and the final score of the game for the Longhorns came on a five-yard run by Josh Holifield to give Marengo a 44-6 lead.

With 1:11 to play, Abbeville Christian blocked a Marengo Academy punt, and Kross Payne scooped up the ball and scored to make the score 44-13.

“We got a great effort from our offensive line all night,” James said.

The Longhorns will face Restoration Academy, the defending AISA Class A champions, next Friday at noon at Troy University.

“This is a once in a lifetime opportunity for these kids,” James said. “I’m excited for them that they get to play for the championship next week.”