With the resignation of Will Hall, Desmond Lindsey will assume the duties of interim head football coach at the University of West Alabama effective immediately.

“Desmond will step in as the interim while we conduct a national search for our next head coach,” UWA Director of Athletics Stan Williamson said. “With the success we have had over the last few years we expect a strong pool of candidates to be interested in the position.” 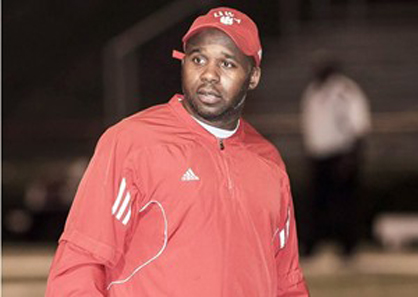 Desmond Lindsey will become UWA’s interim head coach while the university conducts a nationwide search to find Will Hall’s successor.

“I am beyond ecstatic to have this opportunity,” Lindsey said. “The people at UWA are friends and colleagues that will last a lifetime for me, so I am motivated to step in and do a great job for them and for UWA.

“We need to continue to build off Coach Hall’s success,” Lindsey said, “It is my responsibility to make sure our student-athletes continue doing what they are supposed to do in the classroom and to keep recruiting headed in the right direction.”

A school record 20 players earned All-GSC honors this season, nine on the first team. The league coaches at the GSC offensive player of the year voted junior quarterback Kyle Caldwell while throwing to receivers tutored by Lindsey.

Since his arrival, he has mentored All-GSC receivers Randy Lowery, Gerald Worsham, Ken May, Chad Toocheck and Seth Roberts. Under Lindsey, Worsham became the program’s career leader in receptions and receiving yards.

In May 2012, Lindsey was selected to participate in the NFL/NCAA Football Academy in Dallas, Texas. The program was developed to provide 30 coaches from NCAA schools and 30 from NFL teams with the necessary tools and networking opportunities that will enhance their chances at success in the football coaching industry.

Lindsey has participated twice in the Bill Walsh NFL Coaches Fellowship Program. He worked with the Pittsburgh Steelers in 2009 and with the Tennessee Titans in 2013. He also published Defeating Press Coverage For Your Wide Receivers with Gridiron Strategies.