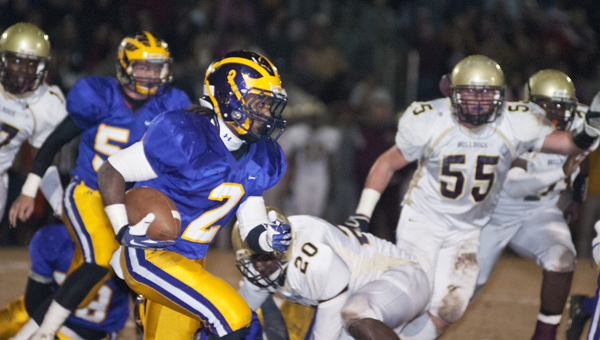 Jakoby Aldridge had rushing touchdowns of 12- and 5-yards against Washington County.

Sweet Water and Washington County’s last few games have had the feel of a boxing match.

The Bulldogs out of Chatom won the latest round 28-14, earning a trip back to the AHSAA Class 2A Championship Game.

For the past two seasons, Sweet Water has beaten Washington County during the regular season only to fall to the team at home in the semifinals.

DeAnthony Holcombe had a great game for Washington County, scoring all four of the team’s touchdowns and grabbing a key interception. 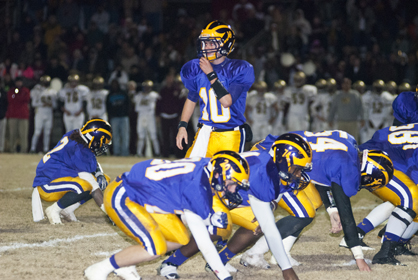 Sweet Water quarterback Branson Davis looks to the sideline for a play call.

The teams traded possessions to start the game before Washington County drew first blood off a 6-yard run by Holcombe.

He would go on to score his second touchdown midway through the second quarter from 32 yards out.

The scores put the visitors up 14-0, where things stayed until halftime.

After the break, Sweet Water came out and drove down the field, scoring off a 12-yard run by Jakoby Aldridge.

But every time Sweet Water would get the momentum, Washington County would answer. This time, Holcombe delivered a dagger, running 50 yards to put his team back up by two touchdowns.

Sweet Water was not done fighting though, and Aldridge scored his second rushing TD of the night off a 5-yard run to tighten the score to 21-14.

But Holcombe had an answer for that too — a 63-yard run that capped scoring for the night.

On defense, Tate Gibbs had an interception for Sweet Water.

Washington County goes on to play Tanner for a title, the same team they lost 28-14 to in last year’s championship game.