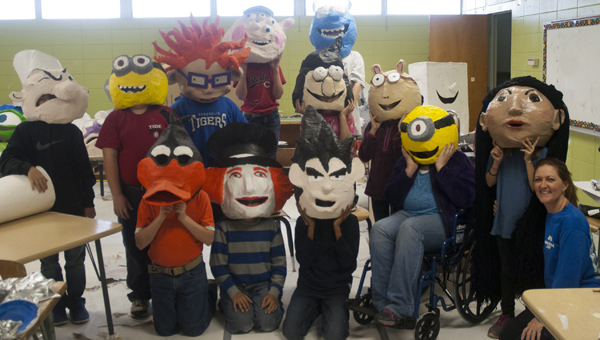 Students in the fifth-grade enrichment class at U.S. Jones Elementary School have been creating paper-mache heads since October for the Christmas on the River day parade.

Students in the fifth-grade enrichment class at U.S. Jones Elementary have been working hard since October to bring back a Christmas on the River tradition for another year.

The 52 students in the enrichment class have been imagining, creating and finishing paper-mache heads of cartoon characters for the Christmas on the River day parade.

“This is truly a kid project,” said project coordinator Dana Hill. “These students have a vision of what they want to create, and they do just that. They go through trial and error, and it takes a lot of hard work, but it is truly a concept-based project.”

Hill added that the project is good for the students because it helps them see they’re making an impact on the community.

“This is a cheap project we can do that effects a lot of people,” she said.

“Everyone enjoys seeing the students in the parade with these heads, and they have a great time creating some of their favorite characters.”

This year, instead of traditional paper-mache, the students have used cement strips that have made the project easier.

“It only takes three layers of these strips, whereas the paper-mache took seven layers,” Hill said. “It’s kind of a contemporary paper-mache, and it makes things go quicker when making the heads.”

Hill wanted to thank the Demopolis Area Chamber of Commerce for donating some money to the class to help with the cost of the paint and other supplies.

The Christmas on the River day parade will be Saturday, Dec. 7 at 11:30 a.m. in downtown Demopolis.