Demopolis uses second half surge to down ALJ 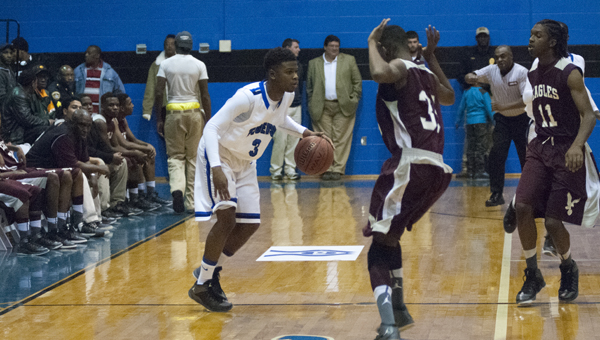 The Demopolis Tigers boys basketball team used a 46-point second half to propel themselves past A.L. Johnson on Tuesday evening. The Tigers (3-3) came away with an 84-55 win over the Eagles.

Kiante Jefferies set the pace for Demopolis, pouring in 25 points to lead his team in scoring. Two other players, Roderick Davis and Tyler Perkins, were in double digits for the Tigers with 16 and 12 points, respectively.

Demopolis only led 17-14 after the first quarter, but extended their lead to nine by halftime, leading 38-29. 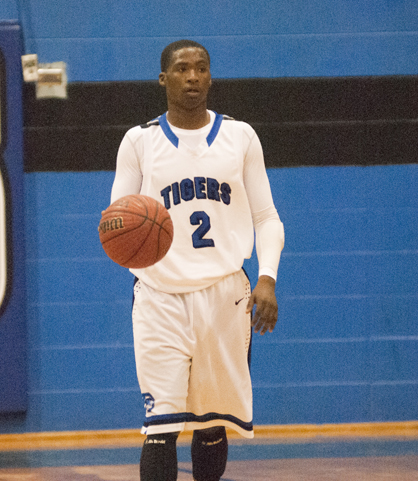 Roderick Davis brings the ball up the court for the Tigers.

Tough defensive play and some fast break scores helped the Tigers pull away from the Eagles in the second half.

“We’ve got to be balanced to be successful, and we were tonight,” Demopolis head coach Rodney Jackson said. “We had three guys in double figures, and all nine of our players scored for us. We felt like we could get a lot out of our offense tonight, and we did.”

Jackson said he feels like his team is starting to come together and play better as a unit.

“This team isn’t quite in basketball shape yet, but we’re starting to gel a little,” he said.

Demetrius Kemp was absent from the team Tuesday because he is in Montgomery preparing for the Alabama-Mississippi All-Star football game.

“Kemp and Cortez (Lewis) are big parts of what we do, but we know we’re going to miss them some nights because of football,” Jackson said. “We’ve got guys that can step up and fill in for them when they’re out though.”

For A.L. Johnson, Leo Baker led the team in scoring with 12 points. Ladarius Carr and Jeremy Mitchell both had 8 for the Eagles.

The win is the second in a row for the Tigers, who defeated Akron Community School on Monday. The Tigers’ other win came against Barbour County. Demopolis will face Hillcrest-Tuscaloosa on Thursday night in Tuscaloosa.