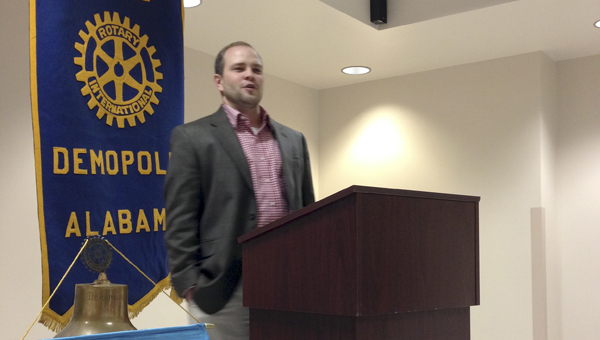 UWA head football coach Brett Gilliland visited the Demopolis Rotary Club on Wednesday to talk about his plans for the program.

The University of West Alabama’s new head football coach Brett Gilliland spoke to the Demopolis Rotary Club on Wednesday about his plans for the program.

Gilliland played quarterback at UWA and was a finalist for the Harlon Hill Trophy in 2003. He holds the UWA records for single season and career passing yards.

Gilliland arrives back in Livingston after coaching stints at Georgia Tech, Georgia Southern and, most recently, Kennesaw State.

“I got into coaching to change lives,” he said. “We’ve had a lot going on with recruiting – both players and coaches – since I got here, and it’s all been going well.”

He added that the program has seen a lot of success in recent years with back-to-back Gulf South Conference Championships.

“It’s an exciting time to be in Livingston, and it’s been exciting to talk to recruits,” he said. “When you say you’re from West Alabama, they know what you’re talking about now, and that wasn’t always the case.”

Gilliland said the main focus for recruiting will be Alabama high schools and Mississippi junior colleges, but he said he also has contacts in Georgia and the panhandle of Florida to help with recruiting.

He added there are three things that are important to building on the success of the program: recruiting, retention and development.

“We have to have the best players on the field possible,” he said. “We have to keep the guys we recruit here in Livingston, and we have to give them an opportunity to succeed here. We also need to develop the players we recruit, not only on the field, but off the field as well.”

He said he also has three core values for his program: toughness, humility and effort.

Gilliland added that he is appreciative of the support that Demopolis gives to UWA and the football program, and he encouraged people to continue to support them.

“I’m not going to promise you wins and losses, but I will promise you that we will have a good product on the field that you can be proud of,” he said.

Gilliland coached under Chan Gailey, Paul Johnson and Jeff Monken as a position coach for each offensive unit at one time or another.