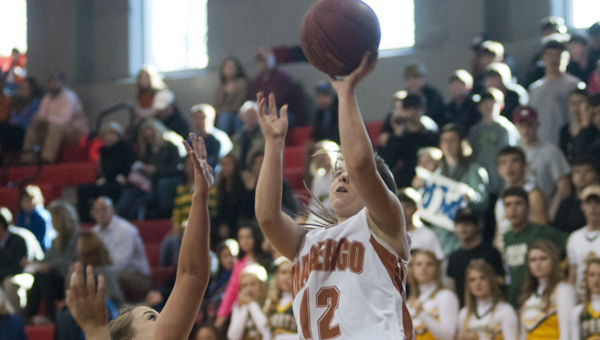 Chandler Stenz goes up for a layup in the Lady Longhorns’ win over Sparta Academy on Thursday morning.

Both Marengo Academy basketball teams advanced to their AISA Class A championship games with wins in the AISA Final Four on Thursday at Huntingdon College in Montgomery.

The Lady Longhorns defeated Sparta Academy 54-43 to advance and the boys team defeated the Lakeside School 57-51.

The Lady Longhorns came out slow against Sparta, and head coach Danny Stenz said it had a lot to do with the physicality of the Lady Warriors.

“I told the girls coming in that they were going to bump us and be physical,” Stenz said. “We didn’t handle that well in the first quarter. We really couldn’t run our offense the way we wanted to.”

After the first quarter, the Lady Longhorns trailed 10-8. In the second quarter, Marengo started to figure out the Lady Warriors’ defense. They were able to get the ball inside for some easier baskets to take a 21-19 lead into the locker room at halftime.

Andrea Edmonds brings the ball up the court and looks for a teammate.

Marengo’s leading scorer at halftime, Chandler Stenz, went down midway through the second quarter with an injury, but she was able to return in the second half.

“We were trying to find ways to get the ball inside more at halftime,” Danny Stenz said. “Getting Chandler back in the second half was big for us. She’s our main ball-handler, and she came up with six assists for us in the second half.”

The Lady Longhorns used a 20-point third quarter to stretch their lead and take control of the game. Sparta didn’t have an answer for Marengo in the paint, which allowed them to pull away for a 54-43 win. Chandler Stenz led the way for the Lady Longhorns with 11 points and 6 assists. Brooke Smyly had 10 points, 9 rebounds and 5 blocks while Anna Michael Crocker had 9 points and 8 rebounds. Conner Etheridge had 10 points in the game and Andrea Edmonds had 8 points and 13 rebounds.

Danny Stenz said he has to make sure the girls stay settled down in the long break before the championship game.

“We came out tight in today’s game,” he said. “I’ve got to make sure the girls stay settled down and loose for tomorrow night’s game.”

In the boys game Thursday morning, key ball-handler Hayden Huckabee was hobbled with an ankle injury, but he did what he could to play through the pain.

Shade Pritchett, Carson Huckabee and Cason Cook led the way offensively for the Longhorns in their 57-51 win.

Marengo led 13-10 after the first quarter with scoring contributions coming only from Pritchett, Cook and Carson Huckabee. 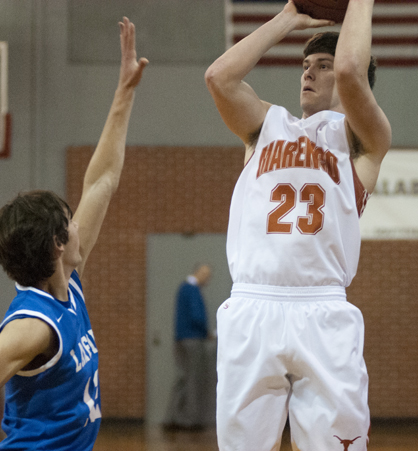 In the second quarter, Lakeside started hitting the three-pointer with more consistency to give themselves a 28-24 lead going into the half.

Hayden Huckabee sat out for most of the first half after starting the game, but came in off the bench in the second half to make an impact on the game.

The Longhorns added to their lead in the fourth quarter to pull away in the final minutes for a 57-51 win. 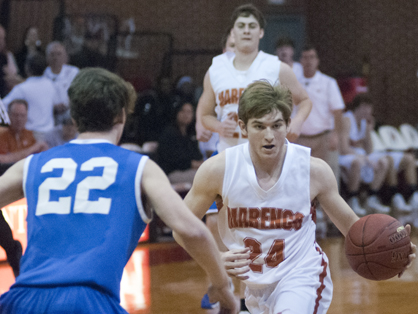 Shade Pritchett drives to the lane against Lakeside.

“We played better defense in the second half,” Longhorns head coach Larry Huckabee said. “We got Shade and Cason more involved, and it’s hard to defend them.”

Larry Huckabee said Hayden Huckabee’s presence on the court in the second half made a big difference in the game.

“It made a huge difference having him on the floor,” he said. “He’s tough to steal the ball from.”

Carson Huckabee led the way for the Longhorns with 18 points. Pritchett had 15 points, 6 rebounds and 4 assists, and Cook had 12 points and 14 rebounds.