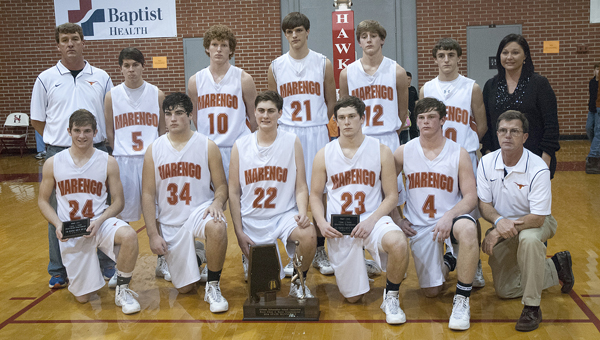 Marengo Academy boys are the AISA Class A Runners-up.

Chambers Academy led through most the AISA Class A championship game Friday night against Marengo Academy, but it still took a buzzer-beating three pointer to give the Rebels the title.

Q.D. Tinsley hit the game-winning shot as time expired to end the Longhorns’ unexpected run to the championship game. 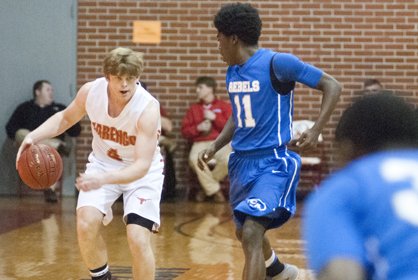 Hayden Huckabee brings the ball up the court.

Shade Pritchett had 15 points to lead the Longhorns, and Cason Cook added 14 points and 15 rebounds, but it still wasn’t enough to win the game.

After Cook tied the game at 43 with 17 seconds to play, Chambers ran the clock down for the last shot and Tinsley hit nothing but net for the win.

“I take full credit for this loss,” head coach Larry Huckabee said. “I was trying to get our guys back into a zone defense, but they didn’t see it and he got a clean shot up. It was a great shot though.”

Cook led the Longhorns in the first quarter to a 13-9, pouring in 8 points in the opening frame. Chambers went on a run in the second quarter and shut the Longhorns offense down to take a 25-17 lead into halftime. 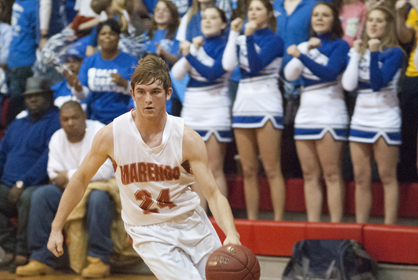 Shade Pritchett drives to the basket.

The Rebels held an eight-point lead well into the third quarter before the Longhorns started getting back into the game. Marengo went on a 7-0 run to pull within one point at 34-33, and only trailed 36-33 heading into the fourth quarter.

Chambers was content to run as much clock as they could during their possessions, and Marengo wasn’t able to tie the game until there was one minute to play in the game.

Carson Huckabee and Pritchett were both named to the all-tournament team, and Chambers’ Tinsley was named MVP.

Larry Huckabee kept his five starters in the game all 32 minutes, and he said that might have been a factor in the loss.

“We got a little tired toward the end of the game,” he said. “Coming into the game, I knew I was going to have to only go with five or six guys, and it became apparent in the game that I needed those five in there.”

Marengo ends their season with a 16-12 record.