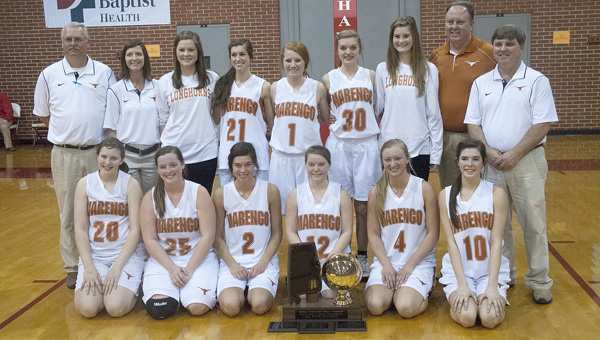 Marengo Academy girls are the 2014 AISA Class A Champions.

The Marengo Academy Lady Longhorns captured the AISA Class A Championship on Friday with a 60-57 overtime win over Patrician Academy.

In the fifth game this season between the two teams, Marengo had to earn their fifth win to finish of an undefeated 27-0 season to win the title. 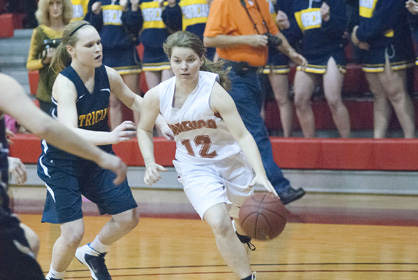 Chandler Stenz drives to the basket.

This was the second season in a row that the Lady Longhorns reached the AISA finals, and this year they returned to Linden with the trophy.

“We were here last year and didn’t get it done, so this one means a lot,” head coach Danny Stenz said. “This is the first girls basketball championship at the school, so this is big for us.”

Patrician led for most of the first three quarters of the game, but the Lady Longhorns were able to figure out what they needed to do offensively late in the third to take a lead. 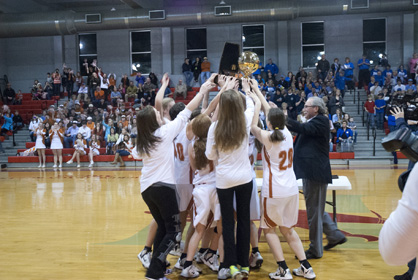 The fourth quarter was back-and-forth, and both teams had chances to win in the final seconds. Marengo tied the game at 49 with 1:15 to play on two free throws from Brooke Smyly. Neither team could find a basket in the last minute, pushing the game to overtime.

In the extra session, Marengo took over, jumping out to a six point lead. Patrician fought back, but couldn’t get enough offense to tie the game back up.

Chandler Stenz led the way for the Lady Longhorns with 20 points, and she was named the tournament MVP.

“It was really a team effort,” she said. “Everyone contributes equally, and we all trust each other to get it done.”

For Chandler, winning a championship in basketball during her senior season is a big accomplishment.

“This is a lot better than last year,” she said. “We know how it feels to win in softball, but basketball is completely different. When you play a team a fifth time, there’s a lot of pressure to win again, but we were able to get it done tonight.”

Danny Stenz said coming into the tournament with an undefeated record put a lot of pressure on the team, but he was confident they could handle it.

“It definitely added pressure coming in undefeated, and I know they felt it,” he said. “But this team doesn’t give up and they got the job done. Patrician is a good, young team, and I know they’ll be back next year.”

In addition to Chandler Stenz being named tournament MVP, Smyly and Edmonds were also named to the all-tournament team.

In the last two seasons, the Lady Longhorns have a 52-3 record.