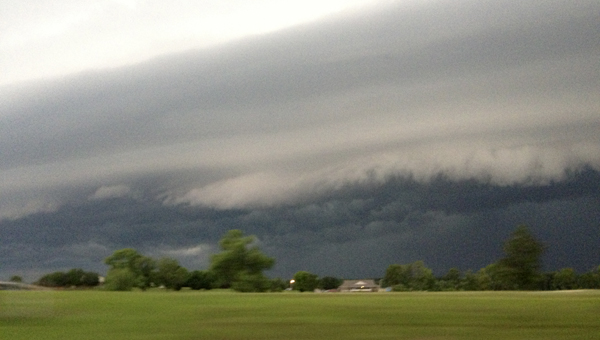 A thunderstorm builds along U.S. 80 between Demopolis and Sumter County last summer.

As of Monday, 276 days have passed since a tornado was reported in Alabama.

That’s the fourth longest tornado “drought” since records started being kept in 1950.

But the Birmingham National Weather Service is warning residents to not become complacent, especially as we enter the spring severe weather season.

The week of Feb. 16-21 has been designated “Severe Weather Awareness Week” in Alabama.

On Wednesday, the National Weather Service is encouraging everyone to conduct their own tornado drill at 9 a.m. The timing will coincide with the weather service’s weekly NOAA All-Hazards Radio Test.

An actual warning will not sound during the test but the weather service says it would be a great opportunity for schools, businesses and homes around Central Alabama to practice what they would do in the event of a tornado warning.

Thunderstorms are common in Alabama and can occur any time of the year.

There are about 2,000 thunderstorms in progress around the world at any given moment; however, less than 1 percent of these are classified as severe.

Severe thunderstorms are defined as storms that produce one-inch hail (about the size of a quarter) or larger and/or strong wind gusts of 58 miles per hour or greater.

A Severe Thunderstorm Watch means that conditions are favorable for the development of severe thunderstorms in and close to the watch area. People located in and around the watch area should keep an eye to the sky and listen to their NOAA weather radios or tune to the local broadcast media for further weather information. Typically, watches last around six hours and cover a relatively large area.

A Severe Thunderstorm Warning means that either a severe thunderstorm is occurring and has been detected by National Weather Service Doppler Radar or a reliable report of one has been received. People in the warned area should take immediate action to protect their lives, lives of others and their property.

Tornadoes can and occasionally do accompany severe thunderstorms. Treat this warning the same as you would for a Tornado Warning by taking the proper safety precautions. Warnings are issued for smaller, more specific locations and generally last for one hour or less.

The best defense against thunderstorms is to stay inside a sturdy, substantial building that can protect you from lightning, hail and winds gusts. Thunderstorms typically do not last very long.

If caught outside, find shelter immediately. Once inside, stay away from windows and avoid electrical equipment. Be sure to secure loose objects outside as these can become dangerous flying debris in high winds.