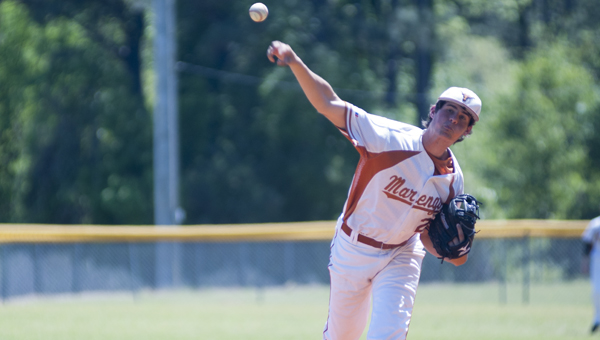 Micah Agee started for Marengo Academy and pitched five innings in the game.

After being down to their final strike in a win-or-go-home game, Marengo Academy pulled out a 7-6 win over Cornerstone Christian to advance to the AISA semifinals.

Wallace Tutt, who was pinch hitting for Tait Sanford, legged out an infield single to allow Brant Lewis to score to tie the game, then a throwing error by the Cornerstone second baseman allowed Weldon Aydelott to come in from second for the game-winning run.

“Speed made a difference on that last play,” Marengo Academy head coach Eddie Edwards said. “We were less than a half step from going home. Wallace has been putting it in play all year, and I put him into a tough spot and he came through.”

Micah Agee started the game for the Longhorns and pitched five innings, allowing five hits and four runs. Only two of the runs were earned. The Longhorns committed six errors in the game. Agee also had five strikeouts in the game.

“We pitched great all day,” Edwards said. “Cornerstone took advantage of the extra outs we gave them. In a playoff game, you generally don’t commit six errors and have the opportunity to keep playing. We never quit and we kept chipping away. Our offense made a big play at the end, but our pitching won the game for us.”

Cornerstone jumped out to a 2-0 lead in the first inning on a Tim Warren single that scored Heath Garrett and an error by the first baseman that scored Ian Briggs.

Marengo cut the lead in half in the bottom of the first on a RBI sacrifice fly by Kyle Friday that scored Hayden Huckabee.

The Longhorns tied the game in the second on a sacrifice fly by Wyatt Hall that brought in Sanford.

In the third, Cornerstone got their two-run lead back on a two-RBI double by Austin Andrews that scored Briggs and Warren.

Marengo battled back to tie it in the fifth with a RBI single by Friday that brought in Hale and an error by the right fielder that scored Huckabee.

Once again, Cornerstone responded by adding two runs in the sixth. Wesley Brown and Jeffery Odgers both scored on a throwing error by the second baseman.

Marengo got one of the two runs back in the bottom of the sixth on a RBI single by Huckabee that brought in Tyler Barkley.

The winning pitcher for Marengo was Carson Huckabee who pitched two innings and struck out three batters. He allowed two runs, but neither of them were earned. He did not allow a hit.

The Longhorns will face Lakeside in a double header Wednesday, April 30 in Eufaula. Game three will be played Thursday, May 1 if necessary.