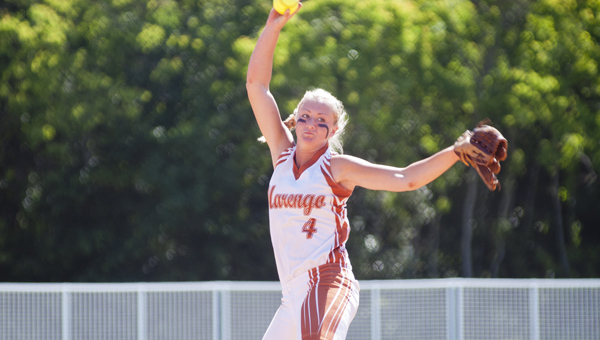 Andrea Edmonds pitched a complete game in a win over Ashford.

For the first time in four years, someone other than Marengo Academy are champs in AISA softball Class A.

The Lady Longhorns fell to Edgewood 6-3 in the championship game.

Andrea Edmonds pitched in six complete games over two days, totaling 41 innings. Marengo Academy head coach Danny Stenz said she did everything she could have done.

“I don’t know anybody else that could have done what she did this weekend,” Stenz said. “It’s like she has a bionic arm. She just won’t let me pull her out of a game. She wants the ball in her hand.”

In the championship game against Edgewood, fatigue set in for the Lady Longhorns, who were playing their third game of the day Saturday and their sixth since the tournament started Friday. Marengo left 11 runners on base and committed five errors in the game.

“Fatigue had a lot to do with it,” Stenz said. “We came out flat and Edgewood came out with energy.”

Edgewood scored two runs in the first inning, one in the second and two in the third to jump out to a 5-0 lead. In the fourth, Kimberly Moore was hit by a pitch with the bases loaded to bring in Macey Petrey to make the score 5-1.

The Lady Longhorns closed the gap even more in the fifth when Brooke Smyly tripled to bring in Edmonds. Smyly also scored on the play because of an error by the Edgewood left fielder.

Momentum appeared to be in Marengo’s corner, but a solo home run by Katrina Harden stretched the lead to 6-3, and Marengo wasn’t able to respond.

The title round appearance was the seventh straight for Marengo.

“This has always been a great program, and I’ve been coaching these girls since they were five and six years old,” Stenz said. “Linden girls are competitive. They work hard and don’t want to lose. It’s tough to see the streak end, but all good things come to an end at some point.”

The Marengo Academy Lady Longhorns started their quest for a fifth straight state title Saturday with an 8-2 win over Ashford Academy.

Marengo jumped out to a 4-0 lead in the first inning and never looked back. A two-RBI single by Brooke Smyly brought in Conner Etheridge and Andrea Edmonds, and an inside-the-park home run by Macey Petrey scored Smyly. 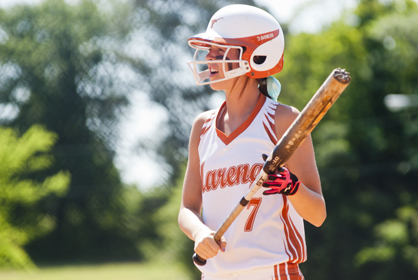 Anna Michael Crocker steps up to the plate.

In the top of the third inning, Ashford was able to score two runs to cut the Marengo lead in half.

In the bottom half of the inning, Etheridge scored on an error by the Ashford center fielder, and a RBI single by Petrey scored Edmonds to put the Lady Longhorns up 6-2.

In the fifth, Petrey scored on an error by the second baseman to put MA on top 7-2, and in the sixth, a groundout RBI by Anna Michael Crocker brought in Chandler Stenz.

Edmonds pitched a complete game and stuck out six batters. She gave up five hits and a walk, and only one of the two runs scored were earned.

The Lady Longhorns will face the loser of Lakeside and Edgewood around noon. The winner of that game will play in the championship series later Saturday afternoon.

In Marengo Academy’s second game of the day Saturday, they kept their championship hopes alive with a 10-1 win over Lakeside.

Edmonds pitched another complete game and struck out seven batters while walking just one.

The Chiefs struck first in the game in the third inning on a RBI single by Chelsea Jones that scored Kasey Grant.

Marengo answered in the bottom of the third on a RBI single by Edmonds that scored Stenz.

In the fourth, Payton Stokes gave the Lady Longhorns a 2-1 lead with a solo home run.

The Lady Longhorns kept their momentum going in the fifth by adding three more runs to their lead. Edmonds was hit by a pitch with the bases loaded that brought in Stenz, then a RBI groundout by Smyly brought in Crocker. Petrey hit a sacrifice fly to right field that scored Etheridge to stretch the lead to 5-1.