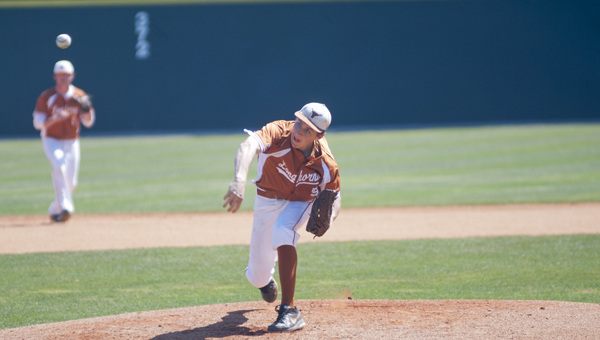 Kyle Friday pitched a complete game against Edgewood Academy to open the AISA Class A championship series. He was credited with the loss.

The Marengo Academy Longhorns had a chance to tie the first game of the AISA Class A championship series Tuesday in the seventh inning, but could not convert and fell to Edgewood 3-2.

The Longhorns chased the Wildcats starting pitcher Chase Laney in the sixth inning, but they could not capitalize on the opportunity.

Both teams were held scoreless through the first two innings until Marengo put the first two runs on the board in the third inning.

A two-RBI single by Weldon Aydelott brought in Hayden Huckabee and Alston Dinning, who was running for Kyle Friday to put the Longhorns on top 2-0. 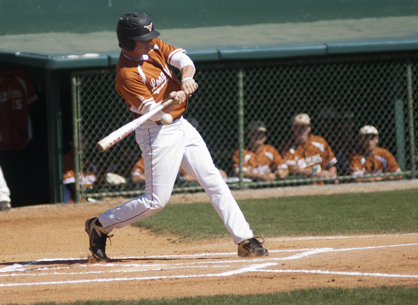 Hayden Huckabee takes a swing at a pitch against Edgewood Academy.

Edgewood responded with three runs in the fourth inning as Taylor Hawthorne scored on an error by Hayden Hall at second base, then a two-RBI single by Jolan Stieringer scored Heath Young and W.B. Hill to take a 3-2 lead.

Marengo had an opportunity in the fifth inning with a leadoff triple by Huckabee, but his teammates were unable to bring him across the plate.

In the seventh, Huckabee was hit by a pitch to lead off the inning, and Friday walked after a flyout by Hall. Huckabee was caught in a rundown between second and third, then Josh Holifield struck out to end the game.

Friday pitched a complete game, striking out four batters and walking three. He gave up five hits and three runs, two of which were earned.

The Longhorns are in a win-or-go-home situation for game two.