ALJ downs Greensboro in 7-on-7 scrimmage 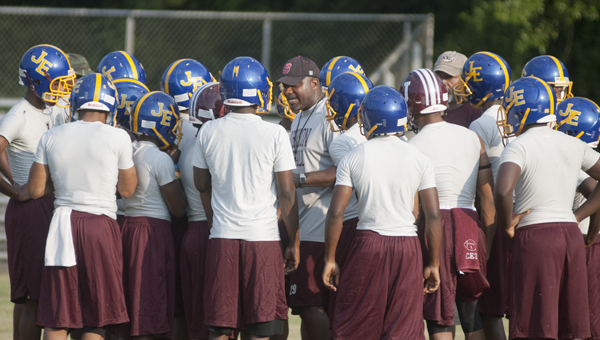 A.L. Johnson head coach Johnny Ford motivates his team before the 7-on-7 against Greensboro on Monday.

The Eagles welcomed the Greensboro Raiders to Thomaston for the game to work on passing formations. They played two 20-minute quarters, and the Eagles came out on top in both. In the first quarter, ALJ won 8-0, and in the second quarter, they won 18-12 in double overtime.

Ford said he liked the way his team competed in the game. 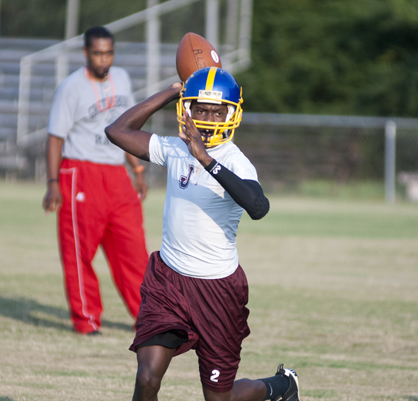 “Our effort and our attitude was good tonight,” he said. “I wanted to see them in different situations to see how they handled adversity. They did a good job moving on after a bad play and staying focused.”

In the first quarter, ALJ quarterback Zynell McGee found Warren Boykin for a 10-yard touchdown pass. McGee connected with Leo Baker for the two-point conversion to take the 8-0 lead.

On their final possession of the first quarter, Greensboro drove down inside A.L. Johnson’s 10-yard line, but the Eagles came up with a stop as time expired.

In the second quarter, Greensboro struck first but failed on the conversion attempt to lead 6-0. The Eagles used all of the clock they could and drove down to tie the game with less than a minute to play. Once again, McGee connected with Boykin for the score. 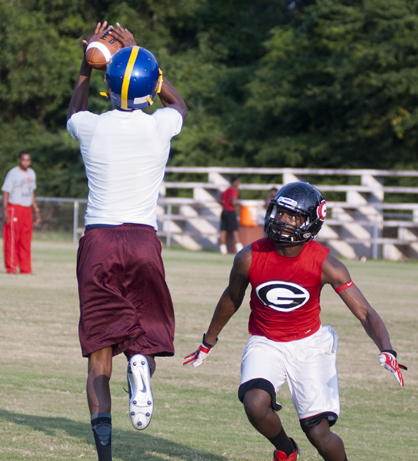 ALJ receiver Warren Boykin comes down with a pass against Greensboro.

In the first overtime, both ALJ and Greensboro scored and missed the conversion to force a second overtime tied 12-12.

ALJ scored to open the second overtime on a fourth down pass from McGee to Mike Croom to take an 18-12 lead, and the Eagles defense came up with a stop on fourth down from the three yard line to seal the victory.

“I really liked the way our guys came out and worked tonight,” Ford said. “Our guys got tired, especially when we got to overtime, but they kept battling until the end. We need to work on our conditioning between now and the start of the season. I think we’ll be fine once everything is in. I thought Greensboro was a very good team. They’re tall, athletic and big. Their coaching staff has done a good job in their short time there.”

Ford said he has gotten good response from the players this summer after taking over for former head coach Mose Jones, who coached the program for 29 years.

“We’re averaging about 26 players a day for workouts,” he said. “All the guys are giving full effort. They’re responding well to what we’re doing.”

The Eagles will open their season Friday, Aug. 22 at home against R.C. Hatch.