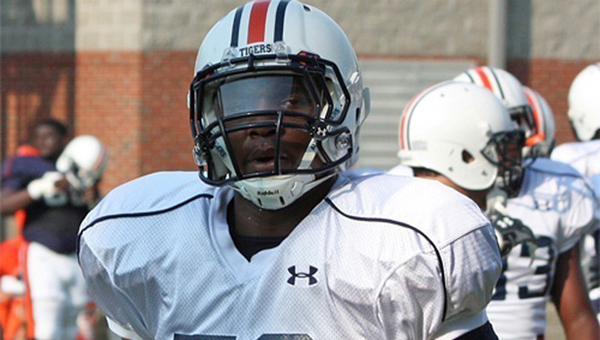 Former Linden Patriot and Auburn Tiger Justin DeLaine will transfer and finish his collegiate football career at the University of West Alabama.

Auburn defensive end Justin DeLaine will transfer and finish his collegiate football career at the University of West Alabama.

From Linden, DeLaine has completed the requirements for his degree from Auburn and will play the 2014 season at UWA as a graduate student. At 6-foot-5 and 240 pounds, DeLaine saw limited action at Auburn after suffering a season-ending knee injury against Mississippi State during the 2011 season.

“Justin gives us an experienced, mature player to add to the defensive front,” UWA head coach Brett Gilliland said. “He has already earned his undergraduate degree from Auburn. We are excited to add him to the family.

DeLaine saw action in two games before sustaining a season-ending knee injury against Mississippi State in week two of the 2011 season. The previous week he tallied two tackles, including one for loss, against Utah State. He was a redshirt on the 2010 national championship squad.

DeLaine recorded 46 tackles, eight sacks, seven tackles for loss, two blocked kicks and two fumble recoveries as a senior at Linden. He led his team to a 12-1 record in 2009 and recorded more than a dozen sacks as a junior at Sumter County.

DeLaine and his new teammates hit the practice field for the first time Monday in preparation for a Sept. 6 season opener at Stillman in the 2014 Tiger Bowl.