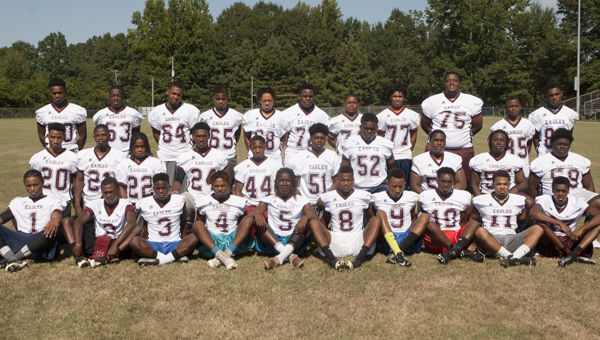 A.L. Johnson will have a new look on the sidelines for the first time in 30 years this season.

Longtime coach Mose Jones retired in May and Johnney Ford has taken over the program.

Ford is a 1990 graduate of Linden High School, and he’s been an assistant coach around the state for 19 years. This season will be his first as a head coach.

The Eagles will field one of their largest teams in recent years with 33 players on the team.

Ford said things are really coming together for them as the season approaches.

“We’re really trying to institute hard work and dedication in these players,” Ford said. “They’re used to settling for getting to the first round of the playoffs, but we want to raise those expectations. We’ve put in a game plan, and the players are really gelling.”

He added that there are 14 seniors on the team, which will help with leadership.

“Having 14 seniors should really help us to be able to compete,” he said. “Having that leadership will go a long way. Everybody is taking reps to get better, and the whole team is buying into what we’re doing.”

The Eagles come into the season ranked No. 10 in the Alabama Sports Writers Association poll. They’re in a tough region with Linden and Maplesville, but a playoff berth should be attainable.

They face Linden and Maplesville in back-to-back weeks on the road in weeks seven and eight, but the Eagles have a chance to be undefeated heading to Linden.

Senior Zynell McGhee will lead the Eagles offensively in 2014 at the quarterback position. He got playing time at the position last season and Ford said he’s ready to take the next step.

Backing him up will be Desmond Mair and Demarquees Tucker.

Jamarcus Croom and Samuel Monroe will be splitting time at tailback this season. The Eagles’ starting fullbacks will be Mike Croom and Lewis Anderson.

Ford is expecting a lot of production out of his backfield this season for his Wing-T offense.

The Eagles have plenty of options at the receiver position with Gregory Baker, Jeremy Mitchell and Emanuel Essex.

Charles Edwards and Michael Mason will both see the field at the tight end position for the Eagles.

Ford said both guys have had a good off-season and he expects them to contribute to the offense in multiple ways.

Backing them up at tight end will be Lonnie Henton.

The Eagles have their most depth on the team on the offensive line. Of the 33 players on the team, 16 of them can play on the line.

The starting tackles for ALJ will be Jorian Lewis and Tywon Scott. At guard, Theodis Burton and Damon Burton are the first-stringers. Starting at center will be Keontez Lewis.

Calling the shots on defense from the middle linebacker position will be Tywon Scott and Mike Croom. Deandre Croom and Devontae Pettway will back them up.

On the outside, Charles Edwards and Samuel Monroe will start with Dyshaun Thrash backing them up.

Jeremy Mitchell and Robin Harris will roam the field from the safety positions for Coach Ford this season.

At cornerback, he has several options to put on the field with Warren Boykin, Gregory Baker, Zynell McGhee, Delonta Connor, Emanuel Essex and Demarquees Tucker.

“It’s a luxury in 1A football to have that many players,” Ford said. “We’ve got depth at every position, which is something we aren’t used to having here. We should be able to keep fresh legs on the field a majority of the time.”