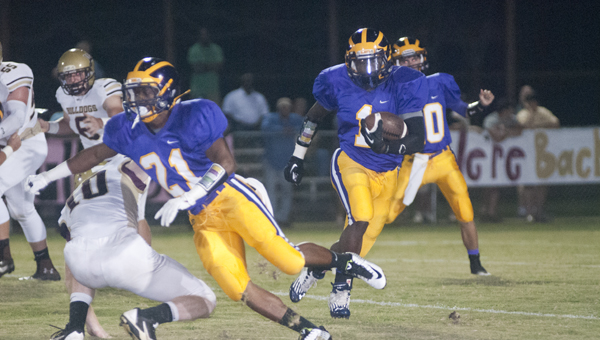 Sweet Water’s Keldric Greene breaks a run to the outside. He led Sweet Water with 70 yards rushing on 14 carries in Thursday night’s loss.

Not much went right for the Sweet Water Bulldogs in Thursday night’s 39-0 loss to region rival Washington County.

Washington County scored early and often in the first half and made the home team earn every yard.

DeAnthony Holcombe, Washington County’s star running back ran for 209 yards and three touchdowns in the game and was able to get chunks of yards nearly every time he touched the ball.

“He’s our starting tailback because he has that senior leadership quality, and he sees things on the field that a lot of others don’t,” WCHS head coach Chris Wilson said. “He breaks tackles and gets yards after contact. Tonight, our offensive line did a great job for him.”

The visiting Bulldogs opened the game with a scoring drive that was capped off by a 15-yard Holcombe run to take a 6-0 lead. On Sweet Water’s first play of the game, Keldric Greene busted a 36-yard run to put Sweet Water on the WCHS 30 yard line. On the next play, quarterback Branson Davis was picked off by Kevin Howard.

On the next play, Holcombe outran the Sweet Water defense for a 66-yard score to put his team on top 12-0.

WCHS extended their lead with 30 seconds to play in the first quarter on a 55-yard touchdown pass from quarterback Bailey Brown to Quinton Smith. After Randall Coxwell converted the extra point, the Bulldogs led Sweet Water 19-0.

Brown connected with another receiver for a score on Washington County’s next drive to extend the lead even more. He found Austin Kinsey open over the middle for a 30-yard score to give his team a 26-0 lead.

After forcing a punt, Washington County added their final score of the half on a 9-yard quarterback keeper by Brown. The visiting Bulldogs led 32-0 at the half.

In the second half, the final score of the game came with 3:21 to play in the third quarter on Holcombe’s final score. He won the race to the corner and scampered 32 yards down the sideline to give Washington County the 39-0 lead.

Washington County’s Brown finished the game 4-5 for 126 yards and two touchdowns, and the team finished with 424 yards.

“We were not very good tonight,” Sweet Water head coach Pat Thompson said. “I didn’t have us prepared, and all the blame falls on me. We’ve got to come back to work on Monday and make it a point that we get better.”