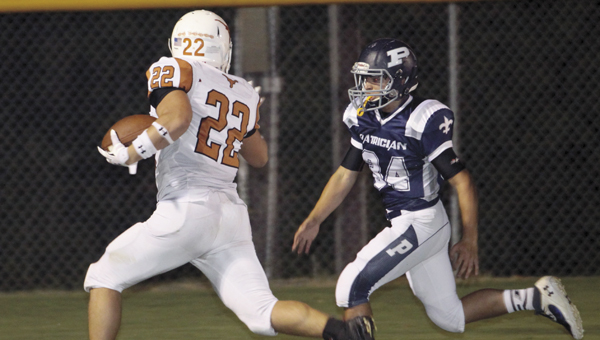 Josh Holifield scores a touchdown for Marengo Academy in Thursday night’s win over Patrician Academy. Holifield accounted for three scores on the night – two on the ground and one receiving touchdown. – Raycelia McIntyre | Marengo Academy

The Marengo Academy Longhorns jumped ahead of Patrician Academy early on their way to a 41-13 win.

In 44 meetings between the two schools, the series is now tied at 22-22 after Thursday night’s contest.

MA head coach Robby James said the rivalry has always been a good one.

Marengo Academy jumped out to a 27-7 first quarter lead and never looked back.

Hayden Huckabee opened scoring for the Longhorns as he capped off a 60-yard drive with a 2-yard touchdown run.

Huckabee connected with Shade Pritchett for a 14-yard touchdown pass on the next drive to make the score 14-0.

Patrician’s Jason Black cut the Longhorn lead in half with a 72-yard touchdown run to make the score 14-7.

Huckabee responded with an 80-yard run of his own to put MA ahead 21-7.

Josh Holifield got in on the scoring action with a 14-yard reception for a touchdown late in the first quarter, making the score 27-7.

Holifield scored twice in the second quarter on runs of 20 yards and 26 yards to put his team ahead 41-7.

Patrician would go on to score one more time in the third quarter.

Huckabee ended the game with five rushes for 109 yards and two touchdowns. Holifield had five carries for 84 yards, two rushing touchdowns and a receiving touchdown.

On defense, Carson Huckabee led the way with 10 tackles. Pritchett also came up with an interception in addition to his receiving touchdown.

“Our kids work hard every week, and we have to make sure we keep our focus going forward,” James said.

“Hopefully we can stay healthy and continue to take it one game it a time. We’ve made some good strides the last couple weeks by spreading the ball around more. It’s great to have a bunch of kids like this that are always looking to improve. I feel good about where we are right now.”

The Longhorns will host Pickens Academy next Friday night at Linden Athletic Field.