Linden gets back on track with 61-6 blowout win 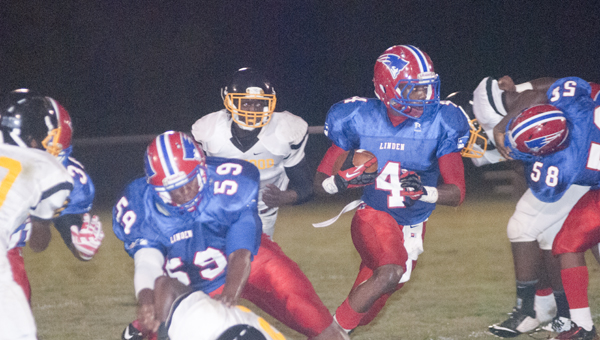 Linden’s Cordarius Scruggs finds a hole to run through against Ellwood Christian on Thursday night.

The Linden Patriots dominated Ellwood Christian for 47 minutes Thursday night on their way to a 61-6 win over the Eagles.

The game was called with approximately a minute and a half left on the clock after an Ellwood player was ejected for appearing to intentionally run into Patriots kicker Dewayne Charleston Jr. on an extra point attempt. Tempers flared in the fourth quarter, so the head official decided the last minute of the game wouldn’t be necessary.

Linden head coach Andro Williams was proud of his players for not drawing any unsportsmanlike conduct penalties when the game got heated.

The Patriots scored on all but one drive in the game and tallied 405 yards of offense. The Patriots ran for 314 yards in the game while holding the Eagles to 0 yards rushing on 31 carries. 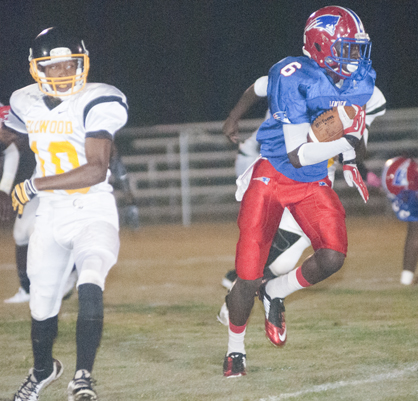 Linden got on the board midway through the first quarter on a three play, 51-yard drive that was capped off by a 9-yard run by Charles Blackmon Jr. and took a 6-0 lead after Charleston’s extra point attempt was no good.

After an Ellwood three-and-out, Linden scored on a 22-yard run by Cordarius Scruggs. Christopher Robinson found Roderick Dansby in the endzone to convert the two-point conversion and give the Patriots a 14-0 lead with 1:40 to play in the opening quarter.

Linden forced a turnover on downs on Ellwood’s next drive and took over at the Eagles 29 yard line. Henry Lee ended the drive with a 4-yard TD run, giving the Patriots a 21-0 lead early in the second quarter.

On the first play of Linden’s next drive, Charleston found Devonta Poole on a 41-yard pass for a score to give Linden a commanding 28-0 lead with 9:12 to play in the half.

After forcing another punt, Linden started their next drive from the Ellwood Christian 28 yard line. Ellwood’s Macio Johnson intercepted a Charleston pass in the endzone with 2:09 to play in the half. This was Linden’s only scoreless drive of the game.

Marqueith Gullett found Michael Lewis on a deep pass downfield for a 78-yard touchdown for the Eagles only score of the night with 1:28 to play in the first half. The two-point conversion attempt was no good, and the Patriots led 28-6.

Charleston found Tywan Smith from 36 yards out to add another Linden score before the half with 40.3 seconds to play. The extra point attempt was no good and Linden led 34-6

On the ensuing kickoff, Ellwood returners weren’t able to control the ball and Linden’s Lee jumped on it to give the Patriots possession at the Eagles 16 yard line.

Two plays later, Scruggs scored his second TD of the night on an 8-yard run with 4.7 seconds to play in the half. The two-point conversion attempt failed and the teams went into the locker rooms at halftime with Linden leading 40-6.

The second half saw much of the same with Linden pounding the ball on the ground and playing stifling defense. With 1:54 to play in the third quarter, linden took a 46-6 lead on a 5-yard run by Blackmon. The extra point was blocked by Ellwood’s Elijah Jenkins.

Linden forced Gullett to fumble on the Eagles’ next drive, and the fumble was recovered by Linden’s Karlton Nathan at the Ellwood 4 yard line. Keishaun Scott scored on the next play with a 4-yard run, and Christopher Robinson ran in the two-point conversion to make the score 54-6.

With all the backups in the game for Linden, Steve Edwards scored the final TD of the game on a 37-yard run. The extra point was good to make the score 61-6 before the game was called.

Ellwood Christian head coach Eric Martinear said “nothing” worked for his team in the game.

Williams said he was pleased with his team’s effort.

“We played pretty well,” he said. “We came out and did what we needed to do. We still have a lot of improvements to make in all three phases of the game. We have to stay consistent in handling our business.”

With the win, Linden moves to 2-3 overall and 2-1 in their region. Ellwood Christian falls to 3-3 overall and 2-2 in the region. The Patriots will host county rival A.L. Johnson next Friday night and the Eagles will host Maplesville on Thursday next week.